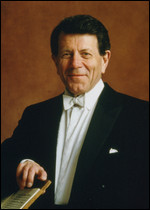 He was born in London and grew up in Bath, Somerset, where he was educated at the City of Bath Boys' School, now known as the Beechen Cliff School. A student of harpsichord and viola at Trinity College, Cambridge, he also was active as a choral conductor and served as music director of the Cambridge Philharmonic Society. In the 1960s, Leppard played an instrumental role in the rebirth of interest in baroque music; in particular, he was one of the first major conductors to perform baroque opera.

In 1952 he made his London debut and then conducted his own Leppard Ensemble.[1] He became closely associated with the Goldsbrough Orchestra, which became the English Chamber Orchestra in 1960. Also, he gave recitals as harpsichordist, and was a fellow of Trinity College and a lecturer in music from 1958 to 1968. He retired from his post as Director of Music at Trinity College in 1968, being succeeded by Richard Marlow.

In 1957 he conducted a concert featuring the four harpsichordists George Malcolm, Eileen Joyce, Thurston Dart and Denis Vaughan. In 1969 he himself was one of the 4 harpsichordists in a similar concert, this time the other players being Eileen Joyce, Geoffrey Parsons and Simon Preston, with the Academy of St. Martin in the Fields under Neville Marriner.[2]

His interest in early music prompted him to prepare several realisations of scores from the period. While musicologists considered his editions controversial, his performances were important for introducing early operatic masterpieces to the general public. His production of Claudio Monteverdi's L'incoronazione di Poppea was presented at the Glyndebourne Festival under his direction in 1962. In the following years he subsequently prepared more operas by Monteverdi, as well as operas by Francesco Cavalli.

In 1963 he composed the original score for Peter Brook's Lord of the Flies, the film adaptation of William Golding's novel of the same name.[3] His original score for the 1969 film Alfred the Great was released by MGM Records in the UK, and vinyl copies are now highly collectible.

In November 1969, he made his USA debut conducting the Westminster Choir and New York Philharmonic, at which occasion he also appeared as soloist in the Joseph Haydn's Harpsichord Concerto in D major. In 1973 he became principal conductor of the BBC Northern Symphony Orchestra in Manchester, a position he retained until 1980.

Leppard has also conducted Britten's Billy Budd at the Metropolitan and San Francisco Operas, Alceste and Alcina at the New York City Opera. He has also conducted at the Royal Opera House, Covent Garden and in Paris, Hamburg, Santa Fe, Stockholm, and Geneva.

At Glyndebourne, he conducted the world premiere of Nicholas Maw's The Rising of the Moon. From 1987–2001, Leppard was the music director of the Indianapolis Symphony Orchestra, where he collaborated with concertmaster Hidetaro Suzuki for 14 seasons. For 2004–2006 he served as Music Advisor to The Louisville Orchestra. Leppard also serves as Artist-in-Residence at the University of Indianapolis.

Raymond Leppard was appointed a Commander of the Order of the British Empire (CBE) by Queen Elizabeth II. In 1973 the Republic of Italy conferred upon him the title of Commendatore della Republica Italiana for services to Italian music. He was awarded an Honorary Degree (Doctor of Letters) by the University of Bath in 1973.[4]

This article uses material from the article Raymond Leppard from the free encyclopedia Wikipedia and it is licensed under the GNU Free Documentation License.

Felix Mendelssohn-Bartholdy "Die Hebriden" Konzert-Ouvertüre op. 26
Update Required To play the media you will need to either update your browser to a recent version or update your Flash plugin.