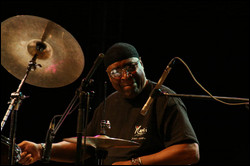 Patterson was born and grew up in Philadelphia, Pennsylvania; his family was musical: his mother had sung with Jimmie Lunceford.[2] His brother, Muhammad Ali, is also a drummer, who played with Albert Ayler, among others. Ali, along with his father and brother, converted to Islam.[3]

Starting off as a pianist he eventually took up the drums, via trumpet and trombone.[4] He joined the United States Army, and played with military bands during the Korean War.[4] After his military service he returned home and studied with Philly Joe Jones.[4]

Ali moved to New York in 1963 and worked in groups with Bill Dixon and Paul Bley.[5] In addition, Ali was scheduled to be the second drummer, alongside Elvin Jones, on John Coltrane's landmark free jazz album Ascension, but he dropped out just before the recording was to take place.[4] Coltrane did not replace him, and settled for one drummer. Ali began to record with Coltrane from Meditations in November 1965 onwards.

Among his credits are the last recorded work of John Coltrane's life (The Olatunji Concert) and Interstellar Space, an album of duets with Coltrane recorded earlier in 1967. Ali "became important in stimulating the most avant-garde kinds of jazz activities".[6] Following Coltrane's death Ali played with his widow, Alice,[4] and during the early 1970s, he ran an influential loft club in New York, called Ali's Alley.[7] Ali also briefly formed a non-jazz project called Purple Trap with Japanese experimental guitarist Keiji Haino and jazz-fusion bassist Bill Laswell. Their double-CD album, Decided...Already the Motionless Heart of Tranquility, Tangling the Prayer Called "I", was released on John Zorn's Tzadik Records label in March 1999.

In the 1980s, he was member of Phalanx, a group with guitarist James "Blood" Ulmer, tenor saxophonist George Adams, and bassist Sirone. From 1997 - 2003 he played extensively with Tisziji Munoz, in a group that usually also included Pharoah Sanders.

Though most known for his work in the jazz idiom, Rashied Ali also made his contributions to other experimental art forms including multi-media performances with The Gift of Eagle Orchestra and Cosmic Legends. Performances such as Devachan and the Monads, Dwarf of Oblivion, which took place at the Kitchen Center for Performance Art, and a special tribute to John Cage in Central Park, have taken performance art to new levels with the addition of fully improvised large scale performance pieces. Other artists of the orchestra and Cosmic Legends have included Hayes Greenfield (sax), Perry Robinson (clarinet), Wayne Lopes (guitar), Dave Douglas (trumpet), Gloria Tropp (vocals), director/pianist Sylvie Degiez along with poets and actors Ira Cohen, Taylor Mead and Judith Malina (Living Theater).

In the last years of his life, Rashied Ali led his own eponymous quintet. A double CD entitled Judgment Day was recorded in February 2005 and features Jumaane Smith on trumpet, Lawrence Clark on tenor sax, Greg Murphy on piano and Joris Teepe on bass. This album was recorded at Ali's own Survival Studio, which has been in existence since the 1970s. In addition to his performance activities Ali served as mentor to numerous young drummers including Matt Smith.

In 2007, Ali recorded "Going to the Ritual" in duo with bassist/violinist Henry Grimes (Porter Records PRCD-4005), with a second duo recording in post-production at the time of Ali's death. Ali and Grimes also played five duo concerts together between 2007 and 2009, and a sixth concert in June 2007 with pianist Marilyn Crispell. Ali is the featured drummer on Azar Lawrence's album Mystic Journey, recorded in April 2009 and released in May 2010.

Rashied Ali died at age 76 in a Manhattan hospital after suffering a heart attack.[8][9] He is survived by wife Patricia and three children.

This article uses material from the article Rashied Ali from the free encyclopedia Wikipedia and it is licensed under the GNU Free Documentation License.

Carl Philipp Emanuel Bach 3.Satz aus dem Oboenkonzert Es-Dur
Update Required To play the media you will need to either update your browser to a recent version or update your Flash plugin.