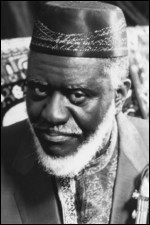 Saxophonist Ornette Coleman once described him as "probably the best tenor player in the world."[1] Emerging from John Coltrane's groups of the mid-1960s Sanders is known for his overblowing, harmonic, and multiphonic techniques on the saxophone, as well as his use of "sheets of sound." Sanders is an important figure in the development of free jazz; Albert Ayler famously said: "Trane was the Father, Pharoah was the Son, I am the Holy Ghost."[2]

Born Farrell Sanders in Little Rock, Arkansas, he began his professional career playing tenor saxophone in Oakland, California. He moved to New York City in 1961 after playing with rhythm and blues bands. He received his nickname "Pharoah" from bandleader Sun Ra, with whom he was performing. After moving to New York, Sanders had been destitute: "[H]e was often living on the streets, under stairs, where ever he could find to stay, his clothes in tatters. Sun Ra gave him a place to stay, bought him a new pair of green pants with yellow stripes (which Sanders hated but had to have), encouraged him to use the name 'Pharoah', and gradually worked him into the band."[3]

Although Sanders' voice developed differently from Coltrane, Sanders was strongly influenced by their collaboration. Spiritual elements such as the chanting in Om would later show up in many of Sanders' own works. Sanders would also go on to produce much free jazz, modified from Coltrane's solo-centric conception. In 1968 he participated in Michael Mantler and Carla Bley's Jazz Composer's Orchestra Association album The Jazz Composer's Orchestra, featuring Cecil Taylor, Don Cherry, Larry Coryell and Gato Barbieri.

In the 1970s, Sanders pursued his own recordings and continued to work with the likes of Alice Coltrane on her Journey In Satchidananda album. Most of Sanders' best-selling work was made in the late 1960s and early 1970s for Impulse Records, including the 30-minute wave-on-wave of free jazz "The Creator has a Master Plan" from the album Karma. This composition featured vocalist Leon Thomas's unique, "umbo weti" yodeling,[5] and Sanders' key musical partner, pianist Lonnie Liston Smith, who worked with Sanders from 1969-1971. Other members of his groups in this period include bassist Cecil McBee, on albums such as Jewels of Thought, Izipho Zam, Deaf Dumb Blind and Thembi.

Although supported by African-American radio, Sanders' brand of free jazz became less popular. From the experiments with African rhythms on the 1971 album Black Unity (with bassist Stanley Clarke) onwards he began to diversify his sound. In the late 1970s and 1980s, Sanders explored different musical modes including R'n'B (Love Will Find a Way), modal jazz, and hard bop.

In 1994 he traveled to Morocco to record the Bill Laswell-produced album The Trance Of Seven Colors with Gnawa musician Mahmoud Guinia. The same year, Sanders appeared on the Red Hot Organization's album, Stolen Moments: Red Hot + Cool, on the track "This is Madness" with Umar Bin Hassan and Abiodun Oyewole and the bonus track, "The Creator Has A Master Plan (Trip hop Remix)." The album was named "Album of the Year" by Time. Sanders worked with Laswell, Jah Wobble, and others on the albums Message From Home (1996) and Save Our Children (1998). In 1999, he complained in an interview that despite his pedigree, he had trouble finding work.[6] In 1997 he was featured on several Tisziji Munoz albums also including Rashied Ali.

In the 2000s, a resurgence of interest in jazz kept Sanders playing festivals including the 2007 Melbourne Jazz Festival and the 2008 Big Chill Festival, concerts, and releasing albums. He has a strong following in Japan, and in 2003 recorded with the band Sleep Walker. Pharoah Sanders is currently represented by Addeo Music International and has album representation with United For Opportunity. Caribou, a co-curator of the ATP Nightmare Before Christmas, selected Pharoah Sanders to perform at the December 2011 festival in Minehead, England.[7]

This article uses material from the article Pharoah Sanders from the free encyclopedia Wikipedia and it is licensed under the GNU Free Documentation License.