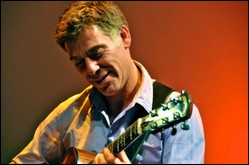 Born in New York City on September 3, 1967, Peter began playing piano when he was 8 but switched to guitar when he was 13, learning the instrument primarily by ear. He studied Jazz at Rutgers University with Ted Dunbar, and Kenny Barron. He completed his degree at The New School in New York City, where he met and studied with one of his mentors and influences Jim Hall. In 1990, Hall asked Bernstein to play in an invitational jazz guitar festival in which John Scofield and Pat Metheny were performing. Bernstein and Hall performed as a duo, and have played together in this context throughout Peter's career. That same year soul jazz great Lou Donaldson discovered Bernstein and Hall played on several of Lou's records. Throughout the 1990s, Bernstein was at the forefront of contemporary jazz; he played with Joshua Redman, Melvin Rhyne, Diana Krall, Larry Goldings, Bill Stewart, Jimmy Cobb, Lee Konitz, Roy Hargrove, Tom Harrell, Joe Lovano, Jack McDuff, Lonnie Smith, Eric Alexander, Brad Mehldau, Christian McBride, Mike LeDonne and many more. Bernstein is known for his clean, warm guitar tone and his lyrical melodic lines.[4]

In 2008, Bernstein became part of The Blue Note 7, a septet formed that year in honor of the 70th anniversary of Blue Note Records. The group recorded an album in 2008, entitled Mosaic, which was released in 2009 on Blue Note Records/EMI, and toured the United States in promotion of the album from January until April 2009.[5] The group plays the music of Blue Note Records from various artists, with arrangements by members of the band and Renee Rosnes. Recently, Bernstein has joined Sonny Rollins' new quintet.

This article uses material from the article Peter Bernstein (guitarist) from the free encyclopedia Wikipedia and it is licensed under the GNU Free Documentation License.