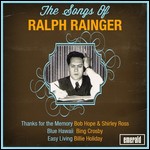 Born Ralph Reichenthal in New York City, Rainger embarked on a legal career before escaping to Broadway where he became Clifton Webb's accompanist.[1]

His first hit "Moanin' Low," with lyrics by Howard Dietz, was written for Webb's co-star Libby Holman in the 1929 revue The Little Show. Moving to Hollywood, Rainger teamed up with lyricist Leo Robin to produce a string of successful film songs,[1] including "I'll Take An Option On You" from the Broadway hit show "Tattle Tales" (1933).

In the years that followed, Rainger wrote or collaborated on such hit songs as "I Wished on the Moon", "Love in Bloom" (comedian Jack Benny's theme song), "Faithful Forever", "Easy Living", "June in January", "Blue Hawaii", and with Leo Robin on the 1938 Oscar-winning song "Thanks for the Memory", sung by Bob Hope in the film The Big Broadcast of 1938.[1]

Rainger paid one year's tuition fees to the Austrian composer Arnold Schönberg in advance, so that Schönberg could pay for the transportation of his belongings to Los Angeles from Paris in 1933.

Rainger died in a plane crash near Palm Springs, California, in 1942. He was a passenger aboard American Airlines Flight 28, a DC-3 airliner that was involved in a mid-air collision with a U.S. Army Air Corps bomber. Rainger was 41 years old when he died; he was survived by a wife, Elizabeth ("Betty"), an 8-year-old son, and two daughters, ages 5 and 1.[1]

This article uses material from the article Ralph Rainger from the free encyclopedia Wikipedia and it is licensed under the GNU Free Documentation License.