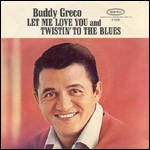 Armando Joseph "Buddy" Greco (August 14, 1926 – January 10, 2017) was an American jazz and pop singer and pianist, who had a long career in the US and UK and was good friends with the Rat Pack, an American group of entertainers. His recordings, in several genres including jazz, pop, and country, have sold millions of records, including "Oh Look A-There Ain't She Pretty", "Up, Up and Away", and "Around the World".[1] His most successful single was "The Lady Is a Tramp", which sold over one million copies.[2] During his career, he recorded over sixty albums. He conducted the London Symphony Orchestra, performed for Queen Elizabeth II, and with the Beatles.[1]

Buddy Greco was born Armando Joseph Greco to an Italian-American family in Philadelphia, Pennsylvania. His mother introduced him to the piano at age four. As a child he sang on the radio. Later, while still a teenager, he performed in Philadelphia's best night clubs. At age 16, Greco was hired by legendary clarinetist and swing band leader Benny Goodman. He spent four years touring the world with the Goodman orchestra playing piano, singing, and arranging.[1][3][4][5]

After leaving Goodman at the still young age of 20, he returned to nightclubs. In 1951 Greco launched his recording career signing with several major labels, including Coral, Kapp, Epic and Frank Sinatra's Reprise.

In the 1960s his career expanded into movies and television. In 1967 Greco shared hosting duties with comedian George Carlin on the CBS television series Away We Go, which replaced the Jackie Gleason Show during the summer. Guests he introduced and performed with during this 14-week run included jazz artists Buddy Rich and Carmen McRae, soul and rock vocalists The 5th Dimension and Spanky and Our Gang, top comedians Rodney Dangerfield and Richard Pryor, and Broadway stars Gregory Hines and Michele Lee. He had a featured role in the motion picture The Girl Who Knew Too Much.[1]

In 1969 he formed a duo with Ron Escheté. For two years they appeared together on several talk and variety shows, including The Mike Douglas Show.[6]

Greco met his fifth and last wife, Lezlie Anders, while she was a Las Vegas performer. Working as his supporting act, she first met Greco when the two of them stepped out, together, on to the stage of the Desert Inn. After marrying, they worked and toured together.[7]

In 1992 Greco began a 13-week Las Vegas run at the Starlight Room at Stars' Desert Inn. This engagement ushered in the second phase of Greco's career, gaining him lasting recognition. The following year he was added to the Philadelphia Music Alliance's Walk of Fame. Shortly after, he toured Italy, France, Australia, and England.[8]

While living in Palm Springs, Greco opened a small club. The walls were decorated with pictures of Greco, the Rat Pack, and other celebrity friends. The room was arranged by his wife. He performed there often and it became a popular place for stars to dine. But he closed it and moved to England.[9]

Living in Palm Desert, California, he continued to appear at his club in Cathedral City, California,[10] until it closed in August 2009.

In 2004 he and Anders were headliners with the Fabulous Palm Springs Follies at the Plaza Theatre in Palm Springs, California.[11][12]

Greco first became acquainted with Great Britain in 1949. He spent many years performing in Britain's clubs. He moved to Essex, keeping his Palm Springs, California property as a vacation home.[4]

In 2008 Greco and Anders toured the UK. Together they performed with the BBC Big Band and appeared in concert at Ronnie Scott's Jazz Club in London. In August of that year, Greco was the first Las Vegas headliner to star at a British casino when he performed in cabaret at the Circus Casino, Star City, Birmingham. In April 2010, he performed a salute to Frank Sinatra for BBC Radio 2 with the 42-piece BBC Concert Orchestra. He toured the UK for over 30 dates from July 2010 with the Swinging Las Vegas Legends Show.

In 2010 Greco and his wife produced the stage show "Fever! The Music of Miss Peggy Lee", which met with critical acclaim at its London West End opening. The show reflects the life and music of Peggy Lee, a personal friend of Lezlie, who inspired the show. Greco played piano and conduced the orchestra while Lezlie sang. The show also received positive reviews touring the U.S.[7]

On New Year's Eve 2011 he made a guest appearance on Jools Holland's Hootenanny singing "Fly Me to the Moon" backed by the Jools Holland Rhythm & Blues Orchestra.

In 2012 Greco again toured the UK, this time in smaller venues, including Thameside Theatre Stage,[13] and The Broadway in Essex.[14]

In 2013 Greco celebrated his 80th year in show business with a concert in Southend, Essex. Stars such as the Rat Pack cast, Atila Huseyin, Kenny Lynch, Paul Young and Michelle Collins were present and took part throughout the evening. Greco and his wife also performed together for the occasion.[15]

Greco married five times.[16] His first wife was Sally Baionno. Wed in 1947; they divorced in 1962. He was married to Dani Crayne from 1961 until they divorced in 1974.[16] In 1974 Greco was married to Margret Kinley until their 1977 divorce. Greco later married Jackie Sabatino in 1977. They eventually divorced. He married Lezlie Anders on 14 April 1995. Greco had three children with Baionno, one with Kinley and three more with Sabatino.[16]

This article uses material from the article Buddy Greco from the free encyclopedia Wikipedia and it is licensed under the GNU Free Documentation License.