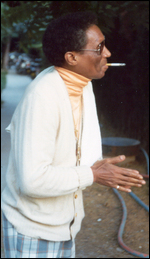 Woodyard was largely an autodidact on drums and played locally in the Newark, New Jersey area in the 1940s. He performed with Paul Gayten in an R&B group, then played in the early 1950s with Joe Holiday, Roy Eldridge, and Milt Buckner. In 1955 he joined Duke Ellington's orchestra and remained until 1966.

After his time with Ellington, Woodyard worked with Ella Fitzgerald, then moved to Los Angeles. In the 1970s he played less due to health problems, but he recorded with Buddy Rich and toured with Claude Bolling. In 1983 he belonged to a band with Teddy Wilson, Buddy Tate, and Slam Stewart. His last recording was on Steve Lacy's 1988 album The Door.

This article uses material from the article Sam Woodyard from the free encyclopedia Wikipedia and it is licensed under the GNU Free Documentation License.

Peter von Winter Romance und Rondo aus dem Oboenkonzert Nr. 2 F-Dur
Update Required To play the media you will need to either update your browser to a recent version or update your Flash plugin.