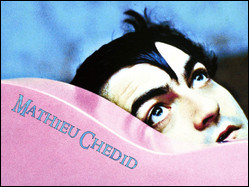 Matthieu Chedid was born in Boulogne-Billancourt, Hauts-de-Seine, France, the son of French singer Louis Chedid, and the grandson of the Egyptian-born French writer and poet of Lebanese descent Andrée Chedid who has written lyrics for him. His sister is the music video and concert director Émilie Chedid.

Chedid took an interest in music early on. In 1978, at the age of six, Chedid lent his voice to the chorus of his father's hit song T'as beau pas être beau alongside older sister, Émilie. During his teenage years and early twenties, Chedid formed a few short-lasting groups such as Tam Tam , Les Bébés fous (the crazy babies) and Les Poissons Rouges (the goldfish) with Mathieu Boogaerts and with the sons of Laurent Voulzy and Alain Souchon, Julien Voulzy and Pierre Souchon. He has collaborated with a number of artists, both on stage and in the recording studio. Early into his solo career, Chedid was the opening act for Texas concerts. He has recorded with NTM, Sinclair, Billy Ze Kick, Brigitte Fontaine, Sean Lennon, Vanessa Paradis, and Johnny Hallyday.

Chedid performs and records under the stage name ‑M-. Chedid created ‑M- as means of overcoming his shyness on stage and also as a way of distancing his work from that of his father and grandmother. The pseudonym comes from Chedid's first initial but also refers to the similar-sounding French word aime, meaning love. The character ‑M- is a superhero, noted for having a playful nature, and recognized for his flamboyant costumes (primarily monochrome suits with slim trousers and long jackets with upward pointed collars) and hair styled into the shape of an M.

In 1997, -M- released his first solo album Le Baptême. During this time; he played mainly solo or with the cellist Vincent Ségal. The album received overall positive critical reception, but public recognition only came a few months later, with the release of the single "Machistador".

Live, -M- played with Cyril Atef, Vincent Segal and DJ Shalom for the samples on some songs. He still works with his sister Emilie Chedid for the realisation of the clips. His live performance largely contributed to his success, playing on his character of -M- to transform every concert into a show. He won his first Victoire de la Musique awards for Male Artist of the Year and Concert of the Year.

-M- gained international exposure through his recording of the song "Belleville Rendez-vous" for the soundtrack of the 2003 Sylvain Chomet animated film The Triplets of Belleville in both French and English. The song, with lyrics by Chomet and music by Benoit Charest, was nominated for a 2003 Academy Award. The music video for "Belleville Rendez-vous" uses both a live-action depiction of ‑M- and an animated depiction incorporated into footage from the film.

In autumn 2003, he released his 3rd album Qui de nous deux (Which one of us two) with the singles "Qui de nous deux", "La bonne étoile", "Mon ego". Softer, this album saw the birth of his first daughter, Billie, for whom an all-pink guitar was built by instrument-maker Cyril Guérin. A pink guitar can be seen in the video for "Qui de nous deux".

In 2007, he worked once again with Vanessa Paradis on her album Divinidylle, released in September 2007.

Rumors circulated before the release of his 2009 studio album, Mister Mystère, that Chedid had decided to drop the character ‑M- to record and perform under his given name.[1] The album, however, was released under the name ‑M- but included photographs of the singer without the wild costumes and hair associated with the ‑M- character. The music video for the first single, "Le Roi des ombres", showed Chedid burning a tiny effigy of his alterego.[2]

In autumn 2012, he released a new album, Îl, played with Lawrence Clais and Brad Thomas Ackley.

He worked with Toumani Diabaté and Sidiki Diabaté on a collective album, Lamomali, released in March 2017 [3] The album also features Philippe Jaroussky as well as Oxmo Puccino lending a mesmeric world music flavour to it that celebrates cultural diversity and world peace.

This article uses material from the article Matthieu Chedid from the free encyclopedia Wikipedia and it is licensed under the GNU Free Documentation License.