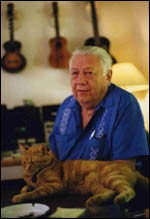 Jack Henderson Clement (April 5, 1931 August 8, 2013) was an American singer, songwriter, and a record and film producer.

Raised and educated in Memphis, Clement was performing at an early age, playing guitar and Dobro; before embarking on his music career he served in the Marines.[1] In 1953, he made his first record for the Sheraton label in Boston, Massachusetts but did not immediately pursue a full-time career in music, instead choosing to study at Memphis State University from 1953 to 1955. Nicknamed 'Cowboy' Jack Clement, during his student days he played steel guitar with a local band, and in 1956 became part of one of the seminal events in rock and roll history when he went to work as a producer and engineer for Sam Phillips at Sun Records. There, Clement worked with future stars such as Roy Orbison, Carl Perkins and Johnny Cash. But most importantly, he discovered and recorded Jerry Lee Lewis while Sam Phillips was away on a trip to Florida (one of those recordings, "Whole Lotta Shakin' Goin' On," was selected in 2005 for permanent preservation in the National Recording Registry at the Library of Congress).

In 1959, Clement accepted an offer to work as a producer at RCA in Nashville, then the most important label in the industry. In 1961, he moved to Beaumont, Texas, joining producer and publisher Bill Hall in opening Gulf Coast Recording Studio and the Hall-Clement publishing company.[1] He returned to Nashville on a permanent basis in 1965, becoming a significant figure in the country music business, establishing a publishing business, and his own recording studio, making records for stars such as Charley Pride and Ray Stevens. In 1971, he co-founded the J-M-I Record Company.

Clement was involved in a few film projects as a singer or songwriter on soundtracks, and produced the 1975 horror film Dear Dead Delilah that marked the last film performance by actress Agnes Moorehead.

In 1987, Clement was approached by U2 to record at Sun Studio in Memphis. He had never heard of U2 but took the session based on the urging of someone else in his office. The result was a portion of the U2 album Rattle and Hum ("When Love Came To Town" with BB King, "Angel of Harlem" about Billie Holiday, and "Love Rescue Me" with backing vocals by Bob Dylan), as well as the Woody Guthrie song "Jesus Christ," which appeared on 1988's "Folkways: A Vision SharedA Tribute to Woody Guthrie & Leadbelly. Portions of the 2 sessions also appear in the film Rattle and Hum.

In 2005, a documentary on Clement entitled Shakespeare Was a Big George Jones Fan was created by Robert Gordon and Morgan Neville, pieced together from Clement's home videos and interviews with peers, including Jerry Lee Lewis and Bono. Clement hosted a weekly program on Sirius XM Satellite Radio. Clement was inducted into the Rockabilly Hall of Fame and the Music City Walk of Fame.

On June 25, 2011, a fire destroyed his home and studio on Belmont Blvd. in Nashville. Clement was unhurt, but many priceless recordings and memorabilia were lost. On April 10, 2013 it was announced Clement would be inducted into the Country Music Hall of Fame.[1]

Clement continued to produce music until shortly before his death. In early 2013 he produced an album on his long time muse, the Irish singer-songwriter Cathy Maguire. On August 8, 2013, Cowboy Jack Clement died at his home in Nashville, Tennessee. He had suffered from liver cancer.[2] He had two children, a daughter, Alison, also a singer and writer, and a son, Niles, an engineer and photographer.

This article uses material from the article Jack Clement from the free encyclopedia Wikipedia and it is licensed under the GNU Free Documentation License.

Johann Strauss "Csárdás" aus der Operette "Die Fledermaus"
Update Required To play the media you will need to either update your browser to a recent version or update your Flash plugin.