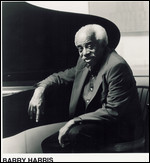 Barry Doyle Harris (born December 15, 1929) is an American jazz pianist, bandleader, composer, arranger and educator. He is an exponent of the bebop style.[1]

Harris began learning the piano at the age of four. His mother was a church pianist and had asked if Harris was interested in playing church or jazz music. Having picked jazz, he was influenced by Thelonious Monk and Bud Powell's music. He went to public areas to play dances for clubs and ballrooms. Harris learned the bebop styles largely by ear, imitating the solos played by Bud Powell in his teenage years.[2]

Harris was based in Detroit through the 1950s and worked with musicians such as Miles Davis, Sonny Stitt and Thad Jones. He also performed in place of Junior Mance, who was Gene Ammons's regular pianist for his group frequently. In addition, Harris toured with Max Roach briefly in 1956 as a pianist after the group's resident pianist Richie Powell (younger brother of Bud Powell) died in a car crash.[3]

Harris performed with Cannonball Adderley's quintet and even had a chance to do a television stint with them.[3]

Harris relocated to New York City in 1960, where he became a performer as well as a jazz educator. During his time in New York, Harris collaborated with Dexter Gordon, Illinois Jacquet, Yusef Lateef and Hank Mobley through performances and recordings.[3]

Between 1965 and 1969, Harris performed extensively with Coleman Hawkins at the Village Vanguard.[4]

During the 1970s, Harris lived with Monk at the Weehawken, New Jersey home of the jazz patroness Baroness Pannonica de Koenigswarter, and so was in an excellent position to comment on the last years of his fellow pianist.[5]

Harris also sat in for Monk for rehearsals at the New York Jazz Repertory Company in 1974.[6]

By the mid-1970s, Harris and his band members gave concerts in European cities and Japan. In Japan, he performed at the Yubin Chokin concert hall in Tokyo over two days and his performance were recorded and compiled into an album released by Xanadu Records.[7]

Since the 1990s, Harris has collaborated with Toronto-based pianist and teacher Howard Rees in creating a series of videos and workbooks documenting his unique harmonic and improvisational systems and teaching process.[9][10]

Harris continues to perform and teach worldwide. When he is not traveling, he holds weekly music workshop sessions in New York City for vocalists, students of piano and other instruments.[11]

Harris has recorded 19 albums as a lead artist.

The Jazz Cultural Theater (JCT) enjoyed a vibrant five-year run until August 14, 1987, when its lease ran out and the rent was increased. Barry simply moved his jazz instrumental and vocal instructional classes to other venues in New York City, Japan, and Europe, supported by a devoted and ever growing international base of students. Many of them are now professionals, including Israeli-born, New York City-based jazz guitarist Roni Ben-Hur, Armenian bebop pianist Vahagn Hayrapetyan, Italian-born brothers Luigi (alto sax) and Pasquale Grasso (guitar).

Over many years Harris has developed a codified methodology and approach to the teaching of jazz. His approach, drawing primarily from the melodic and harmonic concepts/techniques utilized by Charlie Parker and Bud Powell, relies upon using the major and minor 6th chords and the octatonic scales (such as Bebop Major, Bebop Dorian, and Bebop Mixolydian, OR major 6th diminished, minor 6th diminished, and dominant seven, respectively) as a basis for creating melody and harmony.

The Bebop Major scale, for example, is a major scale with an extra note between the 5th and 6th scale degrees. A typical exercise using this scale involves playing a C Major 6th chord up the scale to a D diminished 7th chord, back to C Major 6th in first inversion, to D diminished 7th first inversion, to C Major 6th in second inversion, and so on, up the scale. Applying voicings, such as Drop 2 and Drop 3, up and down the scale in this way gives more possibilities for movement, as opposed to playing one static voicing when chording or "comping" through jazz tunes. The same concept applies as well to the minor 6th diminished scale. His concept of "borrowing notes," in which a related diminished note (or notes) is used in a major or minor 6th chord voicing and then resolved (or a major or minor 6th chord note is used in the related diminished 7th chord and then resolved) is an additional way of creating movement.

Harris also stresses the relationship of the major 6th chord to the minor 7th chord. Both share the same four notes and differ only by what note is considered the bass. The same relationship occurs between the minor 6th chord and the half-diminished 7th chord, that is, that C minor6 and A minor7b5 are almost interchangeable.

His approach to jazz harmony also relies heavily on diminished 7th chords and their relationship to dominant 7th chords. Utilizing the diminished 7th chord, he has also formulated scales of chords, which allow pianists and guitar players greater freedom in accompaniment and to play, in his own words, "movement, not chords".

Harris can be heard and seen teaching the Major 6 diminished scale in this YouTube video of a 2008 clinic he conducted in Spain.

Frans Elsen took videos during several years of Barry Harris workshops at the Royal Conservatory of Music at the Hague. He edited them into 54 videos which he felt represent the techniques Harris taught in the Hague.

With Art Farmer and Donald Byrd

This article uses material from the article Barry Harris from the free encyclopedia Wikipedia and it is licensed under the GNU Free Documentation License.