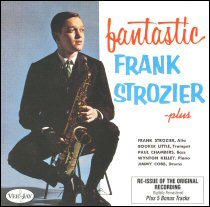 Strozier was born in Memphis, Tennessee, where he learned to play piano.[1][2] He grew up in a middle-class family. His father, Frank, Sr., was a pharmacist who owned a drug store and his mother, Mildred, worked as a clerk in the same drug store.[3] In 1954, he moved to Chicago, where he performed with Harold Mabern, George Coleman, and Booker Little (all, like Strozier, from Memphis).[1] He recorded with the MJT + 3 from 1959–1960, and led sessions for Vee-Jay Records.

After moving to New York, Strozier was briefly with the Miles Davis Quintet in 1963[2] (between the tenures of Hank Mobley and George Coleman) and also gigged with Roy Haynes. He relocated to Los Angeles, where he worked with Chet Baker, Shelly Manne, and most notably the Don Ellis big band.[2] Returning to New York in 1971, Strozier worked with Keno Duke's Jazz Contemporaries,[1] the New York Jazz Repertory Company, Horace Parlan and Woody Shaw, as well others.

This article uses material from the article Frank Strozier from the free encyclopedia Wikipedia and it is licensed under the GNU Free Documentation License.

Frédéric Chopin Impromptu Ges-Dur op. 51
Update Required To play the media you will need to either update your browser to a recent version or update your Flash plugin.