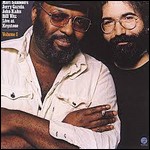 Merl Saunders, (February 14, 1934 – October 24, 2008) was an American multi-genre musician who played piano and keyboards, favoring the Hammond B-3 console organ.

Born in San Mateo, California, Saunders attended Polytechnic High School with singer Johnny Mathis.[1] He served in the Army from 1953 to 1957. He worked as musical director of the Billy Williams Revue and served in a similar capacity in Oscar Brown Jr.'s off-Broadway show, Big Time Buck White.

He gained notice in the 1970s when he began collaborating with Jerry Garcia, with whom he had begun playing in 1971 at a small Fillmore Street nightclub called the Matrix.[1] He sat in with the Grateful Dead, and co-founded the Saunders/Garcia Band which produced three albums, and which became The Legion of Mary with the addition of Martin Fierro (sax) in 1974. It disbanded the following year, but he and Garcia continued to collaborate in the band Reconstruction during 1979, collaborating with Ed Neumeister (Trombone), Gaylord Birch (drums) and John Khan (Bass).

Merl Saunders took the lead in reintroducing Jerry Garcia to his guitar after Jerry suffered a diabetic coma in the summer of 1986.

In 1990 he released the world music and New Age classic album Blues From the Rainforest, a collaboration with Jerry Garcia and Muruga Booker. This led to the release of a video which chronicled Saunders' journey to the Amazon, and the subsequent albums Fiesta Amazonica, It's in the Air, and Save the Planet so We'll Have Someplace to Boogie. One of the songs from Blues From the Rainforest was used as part of the soundtrack for the TV series Baywatch. Saunders continued to perform with the Rainforest Band for the next ten years.

He has worked with musicians Paul Pena, Bonnie Raitt, Phish, Widespread Panic, Miles Davis, and B. B. King. Merl also recorded with The Dinosaurs, a "supergroup" of first-generation Bay Area rock musicians.

He had his own record label, Summertone Records, and had also recorded on Fantasy Records, Galaxy Records and Relix Records as well as the Grateful Dead and Jerry Garcia labels. He worked with the Grateful Dead on the theme music for the 1985 TV show The New Twilight Zone, and as musical director he worked with Mickey Hart on the score for the show. He also worked on the TV series Nash Bridges, and worked on several soundtracks for movies, including Fritz the Cat and Steelyard Blues. He was production co-ordinator for the Grammy Awards for two years, and for the Grammy's Greatest Moments TV special. He also supplied the music for the computer animation video Headcandy: Sidney's Psychedelic Adventure.

He worked with several charitable organizations such as the Seva Foundation, the Rex Foundation, the Rainforest Action Network, and the Haight-Ashbury Free Clinic, and headlined the Haight Street Music Fair for 24 consecutive years. He has been granted a Doctorate of Music by Unity College, in Unity, Maine.

In 2002, Merl suffered from a stroke that paralyzed one side of his body and curtailed his musical career. Merl Saunders died in San Francisco, California on the morning of October 24, 2008, after fighting infections as a result of complications related to the stroke which he suffered in 2002.[2] He is survived by his two sons, Tony Saunders (bassist) and Merl Saunders Jr. (a senior executive director of National Academy of Recording Arts and Sciences), and his daughter Susan Mora.

In December 2008, TMZ reported the estate of Merl Saunders had filed a lawsuit against the estate of Jerry Garcia, disputing royalties for a 2004 live album. Saunders estate claims they were not aware of the albums release and claim they have equal rights to the royalties. They want compensation for over $100,000.[3]

Playing contributions to other major albums with others

Playing contributions to singles with others

This article uses material from the article Merl Saunders from the free encyclopedia Wikipedia and it is licensed under the GNU Free Documentation License.