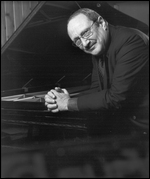 Mike Melvoin (May 10, 1937 – February 22, 2012) was an American jazz pianist, composer, and arranger. He served as chairman and president of The Recording Academy and worked as a prolific studio musician, recording with Frank Sinatra, John Lennon, The Jackson 5, Natalie Cole, and The Beach Boys. Melvoin was nominated for the 2003 Grammy Award for Best Jazz Instrumental Solo for "All or Nothing at All" from his album It's Always You.[1]

Melvoin was born in Oshkosh, Wisconsin, and began playing the piano at the age of three. He studied English at Dartmouth College, graduating in 1959, but decided to pursue a career in music.[2] After moving to Los Angeles in 1961, he played with Frank Rosolino, Leroy Vinnegar, Gerald Wilson, Paul Horn, Terry Gibbs, Joe Williams, Peggy Lee and others. He released his debut album as a bandleader, Keys to Your Mind, in 1966 on Liberty Records. Melvoin played in clubs in Los Angeles, and accompanied singer Bill Henderson and played with Herb Ellis and Plas Johnson on Concord Jazz releases.

Melvoin worked extensively as a studio musician, performing on the Beach Boys' Pet Sounds (1966), Frank Sinatra's That's Life (1966), the Jackson 5's ABC (1970), John Lennon's "Stand by Me" (1975), Tom Waits' Nighthawks at the Diner (1975), and Barbra Streisand's "Evergreen (Love Theme from A Star Is Born)" (1976). He worked in the early 1970s as a music director on The Partridge Family recordings, often playing keyboard, and also began composing for film and television including contributing scores to Fame and MacGyver.

His children, Wendy (of Prince's band The Revolution, and later of Wendy & Lisa), Susannah and Jonathan all became professional musicians.

Melvoin was the first active musician to serve as the head of NARAS. When NARAS introduced category changes to the Grammys in 2011, he opposed them.[3]

This article uses material from the article Mike Melvoin from the free encyclopedia Wikipedia and it is licensed under the GNU Free Documentation License.