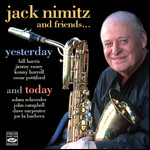 He played in a variety of genres including jazz and rock. He appeared on many jazz albums as sideman and rock albums as session musician, including The Beach Boys singles "Sloop John B", "Please Let Me Wonder, and "The Girl from New York City".

Nimitz was born in Washington, D.C., and began playing clarinet at the age of twelve. Two years later, he started playing alto saxophone and worked in local bands. He switched to baritone sax and found work in the territory bands of Willis Conover, Johnny Bothwell, Bob Astor, and Daryl Harpa. During the 1950s, he spent two years with the Woody Herman band and worked intermittently for Stan Kenton. He had steady work as a member of the house band at the Savoy.[2]

Nimitz moved to Los Angeles and became a studio musician. He played with Bill Berry, Benny Carter, Bill Perkins, Bud Shank, Frank Strazzeri, Gerald Wilson, Supersax, and the Lighthouse All-Stars. He released his first album as a leader in 1995 for Fresh Sound when he was sixty-five.[2] He recorded with vocalists Johnny Hartman, June Christy, Peggy Lee, Carmen McRae, Anita O'Day, and Diane Schuur.

The Jack Nimitz Quintet played their final performance on May 10, 2009, in Northridge, California. Nimitz died in Los Angeles at the age of 79 from complications due to emphysema.[3]

This article uses material from the article Jack Nimitz from the free encyclopedia Wikipedia and it is licensed under the GNU Free Documentation License.

Joseph Haydn Scherzando Nr. 4 G-Dur
Update Required To play the media you will need to either update your browser to a recent version or update your Flash plugin.