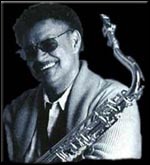 Plas John Johnson Jr. (born July 21, 1931)[1] is an American soul-jazz and hard bop tenor saxophonist, probably most widely known as the tenor saxophone soloist on Henry Mancini’s "The Pink Panther Theme". He also performs on alto and baritone sax as well as various flutes and clarinets.

Born in Donaldsonville, Louisiana, he sang with his family's group until his saxophonist father bought him a soprano saxophone. Largely self-taught, he soon began playing alto and later tenor saxophone. He and his pianist brother Ray first recorded as the Johnson Brothers in New Orleans in the late 1940s, and Plas first toured with R&B singer Charles Brown in 1951.[2] After army service, he and his brother moved to Los Angeles in 1954,[3] and he soon began session recordings as a full-time musician, backing artists such as B.B. King and Johnny Otis as well as scores of other R&B performers.[4][5][6] An early supporter was Maxwell Davis, who hired him to take over his own parts so that he could concentrate on producing sessions for the Modern record label.[5]

Recruited by Johnny Otis and executive Dave Cavanaugh for Capitol Records in the mid-1950s, Johnson also played on innumerable records by Peggy Lee, Nat "King" Cole, Glen Gray, Frank Sinatra and others. He remained a leading session player for almost twenty years, averaging two sessions a day and playing everything from movie soundtracks and Les Baxter's exotica albums, to rock and roll singles by such artists as Ricky Nelson and Bobby Vee, and R&B records by such performers as Larry Williams, Bobby Day, and Richard Berry. He played on many of the Beach Boys’ records, and was an integral part of a number of instrumental groups that existed in name only, such as B. Bumble and the Stingers and The Marketts.[5] Unlike many session musicians of the time he became known by name, but for a time also recorded under the pseudonym Johnny Beecher for the budget CRC Charter label to avoid contractual disputes.[5][7]

In the late 1950s and early 1960s he was a regular member of Henry Mancini's studio orchestra and in 1963 he recorded the Pink Panther theme, written by Mancini with Johnson in mind. Johnson said of the recording: "We only did two takes, I think... When we finished, everyone applauded -- even the string players. And that's saying something... They never applaud for anything."[2] Another solo for a well-known television series was on The Odd Couple's theme music. Johnson was also employed by Motown, and played on hits by Marvin Gaye, the Supremes and others. Johnson also played on sessions for Nancy Sinatra, and can be heard on the 1963 album Ella Fitzgerald Sings the Jerome Kern Songbook, recorded with the esteemed arranger Nelson Riddle. His sax is also heard on two of the other great Ella Fitzgerald songbooks - The Harold Arlen Songbook and The Johnny Mercer Songbook.

In 1964, Johnson was the featured performer on Blue Martini (Ava Records), a concept album by John Neel. It was a groundbreaking album, with the saxophone being the lead "voice" surrounded by a full string section. This jazz/classical hybrid contains some of Johnson's best and most innovative playing, with the standout being "Bury Me Blue". In 1969, T-Bone Walker introduced Harmonica Slim to the record producer Bob Thiele. Thiele utilised a company of jazz and R&B musicians including Johnson, to work with Harmonica Slim on his debut album.[8][9]

Johnson joined the studio band for the Merv Griffin Show in 1970, and also played with a number of jazz and swing bands of the period. He joined Lincoln Mayorga in creating direct-to-disc recordings for Sheffield Labs. He later recorded for the Concord label, worked with the Capp-Pierce Juggernaut, and toured in 1990 with the Gene Harris Superband.[4] He continues to record and perform, particularly at jazz festivals.[6]

With the Gerald Wilson Orchestra

This article uses material from the article Plas Johnson from the free encyclopedia Wikipedia and it is licensed under the GNU Free Documentation License.