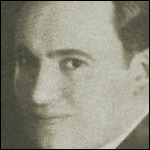 Davis was born in New York City. He started performing in vaudeville acts when he was 14 years old and later performed as Blossom Seeleys accompanist with Benny Fields tours. In the early 1920s, he dedicated himself to professional songwriting and had his first hit in 1920 with Margie.

In 1927, Davis returned to the theatre writing scores for the Broadway shows Artists and Models of 1927, Sons o Guns, and 3 editions of Cotton Club revues.

This article uses material from the article Benny Davis from the free encyclopedia Wikipedia and it is licensed under the GNU Free Documentation License.