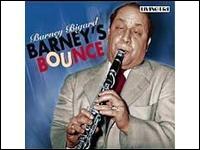 Bigard was born in New Orleans to a family of Creoles. The son of Alexander and Emanuella Bigard, he had two brothers, Alexander Jr. and Sidney.[2] His uncle, Emile Bigard, was a jazz violinist.[3] He attended local schools and studied music and clarinet with Lorenzo Tio.

In the early 1920s he moved to Chicago, where he worked with King Oliver and others. During this period, much of his recording, including with clarinetist Johnny Dodds, was on tenor saxophone, which he played often with great lyricism, as on Oliver's "Someday Sweetheart".

In 1927 Bigard joined Duke Ellington's orchestra in New York, where he was part of the Harlem Renaissance. He played with Ellington until 1942. They played primarily at the Cotton Club until 1931, then toured almost nonstop for over a decade. With Ellington, he was the featured clarinet soloist, while also doing section work on tenor saxophone.

After leaving Ellington's orchestra, Bigard moved to Los Angeles, California. He did soundtrack work for Hollywood film studios and had an onscreen featured role with an all-star band led by Louis Armstrong in the film New Orleans (1947). He began working with trombonist Kid Ory's group during the late 1940s. He later worked with Armstrong's touring band, the All Stars, and others. Bigard appeared and played in the movie St. Louis Blues (1958), with Nat King Cole, Ella Fitzgerald, Pearl Bailey and Eartha Kitt.

Bigard wrote an autobiography entitled With Louis and The Duke. He is credited as composer or co-composer on several numbers, notably the Ellington standard "Mood Indigo".

Barney Bigard and His Jazzopators

The first version of the song "Caravan" (composed by Juan Tizol and later rearranged by Duke Ellington) was recorded in Hollywood, 18 December 1936, and performed as an instrumental by Barney Bigard and His Jazzopators. Two takes were recorded and were issued, although L-0373-2 is by far the more commonly found take. The band members were Cootie Williams (trumpet), Juan Tizol (trombone), Barney Bigard (clarinet), Harry Carney (baritone sax), Duke Ellington (piano), Billy Taylor (bass), and Sonny Greer (drums). All of the players were members of the Duke Ellington Orchestra, which was often drawn upon to record small-group sides. Even though Ellington was present at the recording date, the session leader was Bigard.

In keeping with Ellington's formation of small groups featuring his primary soloists, Bigard continued to be featured under his own name on Variety and subsequently Vocalion Records and OKeh through 1940. When Ellington signed with Victor in 1940, Bigard (and other Ellingtonians) recorded for Bluebird under his own name. He sat in with the Glenn Miller Orchestra for some of their biggest hits, such as "Moonlight Serenade", "Little Brown Jug", and "Tuxedo Junction". Bigard was also a member of Louis Armstrong's All Stars before and after Edmond Hall joined. Bigard can be seen with the All Stars in the movie The Glenn Miller Story.

After World War II, Bigard recorded under his own name for Signature Records, Rex, Black & White, Selmer Records, and Keynote in 1944–45. He also recorded an album for Liberty in 1957 and an album for French Vogue Records as "Barney Bigard-Claude Luter Quintet" in 1966.

This article uses material from the article Barney Bigard from the free encyclopedia Wikipedia and it is licensed under the GNU Free Documentation License.