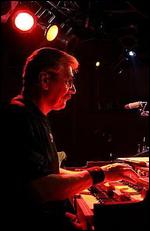 Wojciech (Wojtek) Karolak (born on 28 May 1939 in Warsaw, Poland, where he still lives today) is a notable Hammond B-3 organ player who refers to himself as "an American jazz and rhythm and blues musician, born by mistake in Middle Europe". He has also played saxophone and piano professionally.

In 1958, he started working with the band the 'Jazz Believers' playing alto saxophone. The Jazz Believers consisted of the future top Polish jazz players, among them Andrzej Trzaskowski, Trafica Giant, Krzysztof Komeda (famed for writing music for Roman Polanskis landmark film Rosemary's Baby), and Jan Ptaszyn Wróblewski. It took a particular level of dedication to play jazz under the Soviet system of the 1950s.

Next, Wojciech Karolak played tenor saxophone in Andrzej Trzaskowskis The Wreckers. In 1961, Karolak switched from saxophone back to piano. In 1962, he formed his own trio and started recording his own music. This trio become the premier jazz band in Poland and backed most Western/American artists visiting Poland, among them Annie Ross, Ray Charles, and Don Ellis, with whom he recorded. In 1963, he started playing with Ptaszyn Wróblewskis Polish Jazz Quartet. In 1964 Karolak (under the name of the Kurylewicz Quintet) recorded an album called Go Right - the first Polish jazz LP ever released.

In 1966, he left Poland for Sweden where he played rock and blues in music clubs in order to, in his own words, "make enough money to buy an apartment and a Hammond B-3", which he eventually bought in 1973. From then on, Karolak spent more time composing and arranging though he did continue to collaborate and perform with others. He cooperated with famed violinist and future Miles Davis alum Micha Urbaniak in Europe and the U.S. While in Western Europe he also played with Red Mitchell, Putte Wickman, Leroy Lowe and others. He then returned to Poland and co-led the group Mainstream and worked as a composer-arranger for the Polish Radio Studio Jazz Orchestra.

In the 1980s he established, with Tomasz Szukalski and Czeslaw Bartkowski, a "superformation": 'Time Killers'. The resulting recording was voted the best Polish jazz record of the decade.

Since the 1990s Karolak has played with the guitarist Jarosaw mietana (who counts among his fans Pat Metheny), and recorded three records with him. With Piotr Baron and Zbigniew Lewandowski, Karolak has started The High Bred Jazz Trio. He has played in numerous concerts with Leszek Cichoskis Guitar Workshop and continues to write, arrange, and perform in Poland and abroad.

Polish President Aleksander Kwaniewski awarded him the Knight's Cross of the Order of Polonia Restituta, Poland's second highest civilian honor after the Order of the White Eagle.

This article uses material from the article Wojciech Karolak from the free encyclopedia Wikipedia and it is licensed under the GNU Free Documentation License.