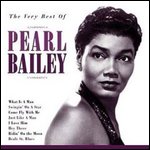 Pearl Mae Bailey (March 29, 1918 – August 17, 1990) was an American actress and singer. After appearing in vaudeville she made her Broadway debut in St. Louis Woman in 1946.[1] She won a Tony Award for the title role in the all-black production of Hello, Dolly! in 1968. In 1986, she won a Daytime Emmy award for her performance as a fairy godmother in the ABC Afterschool Special, Cindy Eller: A Modern Fairy Tale.

Her rendition of "Takes Two to Tango" hit the top ten in 1952. She received the Screen Actors Guild Life Achievement Award in 1976 and the Presidential Medal of Freedom on October 17, 1988.

Bailey was born in Newport News in Virginia, to the Reverend Joseph James and Ella Mae Ricks Bailey.[2] She was raised in the Bloodfields neighborhood of Newport News, Virginia. She graduated from Booker T. Washington High School in nearby Norfolk, Virginia, the first city in the region to offer higher education for black students. Blues singer Ruth Brown from Portsmouth, Virginia was one of her classmates.

She made her stage-singing debut when she was 15 years old. Her brother Bill Bailey was beginning his own career as a tap dancer, and suggested she enter an amateur contest at the Pearl Theatre in Philadelphia. Bailey won and was offered $35 a week to perform there for two weeks. However, the theatre closed during her engagement and she was not paid.[2] She later won a similar competition at Harlem's famous Apollo Theater and decided to pursue a career in entertainment.

Bailey began by singing and dancing in Philadelphia's black nightclubs in the 1930s, and soon started performing in other parts of the East Coast. In 1941, during World War II, Bailey toured the country with the USO, performing for American troops. After the tour, she settled in New York. Her solo successes as a nightclub performer were followed by acts with such entertainers as Cab Calloway and Duke Ellington. In 1946, Bailey made her Broadway debut in St. Louis Woman. For her performance, she won a Donaldson Award as the best Broadway newcomer. Bailey continued to tour and record albums in between her stage and screen performances. Early in the television medium, Bailey guest starred on CBS's Faye Emerson's Wonderful Town. She hosted her own variety series on ABC, The Pearl Bailey Show (January–May 1971).

Her support of female impersonator Lynne Carter led him to credit Bailey with launching his career.[3]

In 1967, Bailey and Cab Calloway headlined an all-black cast version of Hello, Dolly! The touring version was so successful, producer David Merrick took it to Broadway where it played to sold-out houses and revitalized the long running musical. Bailey was given a special Tony Award for her role and RCA Victor made a second original cast album. That is the only recording of the score to have an overture which was written especially for that recording.

Following her 1971 television series, she provided voices for animations such as Tubby the Tuba (1976) and Disney's The Fox and the Hound (1981). She returned to Broadway in 1975, playing the lead in an all-black production of Hello, Dolly! She earned a degree in theology from Georgetown University in Washington, D.C., in 1985 at age 67.

Later in her career, Bailey was a fixture as a spokesperson in a series of Duncan Hines commercials, singing "Bill Bailey (Won't You Come Home)". She also appeared in commercials for Jell-O,[4] and Westinghouse.[5]

In her later years Bailey wrote several books: The Raw Pearl (1968), Talking to Myself (1971), Pearl's Kitchen (1973), and Hurry Up America and Spit (1976). In 1975 she was appointed special ambassador to the United Nations by President Gerald Ford. Her last book, Between You and Me (1989), details her experiences with higher education. On January 19, 1985, she appeared on the nationally televised broadcast of the 50th Presidential Inaugural Gala, the night before the second inauguration of Ronald Reagan. In 1988 Bailey received the Presidential Medal of Freedom from President Reagan.

Bailey, a Republican, was appointed by President Richard Nixon as America's "Ambassador of Love" in 1970. She attended several meetings of the United Nations and later appeared in a campaign ad for President Gerald Ford in the 1976 election.[6]

She was awarded the Bronze Medallion in 1968, the highest award conferred upon civilians by New York City.

Bailey was a very good friend of actress Joan Crawford.[7] In 1969, Crawford and Bailey joined fellow friend Gypsy Rose Lee in accepting a USO Award. In the same year, Bailey was recognized as USO "Woman of the Year".[8][9] Upon the passing of Crawford in May 1977, Bailey spoke of Crawford as her sister before singing a hymn at her funeral.[7][10] U.S. Ambassador and American socialite Perle Mesta was another close friend of Bailey.[11] In the waning days of Mesta's life, Bailey visited her frequently and sang hymns for her.[12][13]

Pearl Bailey died at Thomas Jefferson University Hospital in Philadelphia on August 17, 1990. Following an autopsy, Dr. Emanuel Rubin, professor and chairman of the Department of Pathology at Jefferson Medical College, announced the cause of death as arteriosclerotic coronary artery disease with significant narrowing of the coronary artery. Bailey is buried at Rolling Green Memorial Park in West Chester, Pennsylvania.

This article uses material from the article Pearl Bailey from the free encyclopedia Wikipedia and it is licensed under the GNU Free Documentation License.

Franz Schubert Moment musical Nr.2 As-Dur D 780
Update Required To play the media you will need to either update your browser to a recent version or update your Flash plugin.