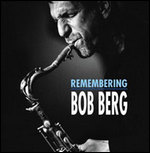 Berg started his musical education at the age of six when he began studying classical piano. He began playing the saxophone at the age of thirteen. He studied at the High School of Performing Arts and Juilliard before leaving school to tour. Berg was influenced heavily by the late 1964–67 period of John Coltrane's music and was known for his extremely expressive playing and tone.[2]

A student from the hard bop school, Berg played from 1973 to 1976 with Horace Silver and from 1977 to 1983 with Cedar Walton. Berg became more widely known through his short period in the Miles Davis band. He left Davis's band in 1987 after recording only one album, You're Under Arrest, with them.[2]

After leaving Davis's band, Berg released a series of solo albums and also performed and recorded frequently in a group co-led with guitarist Mike Stern. On these albums he played a more accessible style of music, mixing funk, jazz and even country music with many other diverse compositional elements to produce albums that were always musical. He often played at the 7th Avenue South NYC club. He worked with Chick Corea, Steve Gadd and Eddie Gómez in a quartet. Berg's tenor saxophone sound was a synthesis of rhythm and blues players such as Junior Walker and Arnett Cobb with the lyricism, intellectual freedom and soul of Wayne Shorter, Joe Henderson and John Coltrane.

Berg was killed in a road traffic accident in East Hampton, New York, while driving near his home with his wife Arja.[1] The person who crashed into his car was driving a cement truck that accidentally skidded on ice. He was survived by his wife and their son and daughter.[1]

This article uses material from the article Bob Berg from the free encyclopedia Wikipedia and it is licensed under the GNU Free Documentation License.