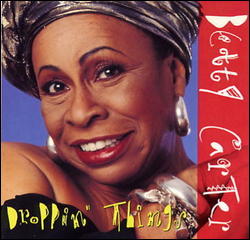 Betty Carter (born Lillie Mae Jones; May 16, 1929 – September 26, 1998) was an American jazz singer known for her improvisational technique, scatting and other complex musical abilities that demonstrated her vocal talent and imaginative interpretation of lyrics and melodies.[1] Vocalist Carmen McRae once remarked: "There's really only one jazz singer—only one: Betty Carter."[2]:xiv

Carter was born in Flint, Michigan, and grew up in Detroit, where her father, James Jones, was the musical director of a Detroit church and her mother, Bessie, was a housewife. As a child, Carter was raised to be extremely independent and to not expect nurturing from her family. Even 30 years after leaving home, Carter was still very aware of and affected by the home life she was raised in, and was quoted saying:

I have been far removed from my immediate family. There's been no real contact or phone calls home every week to find out how everybody is…As far as family is concerned, it's been a lonesome trek…It's probably just as much my fault as it is theirs, and I can't blame anybody for it. But there was…no real closeness, where the family urged me on, or said…'We're proud'…and all that. No, no…none of that happened.[2]:7

Despite the isolation from her family that Carter felt due to their lack of support, it is possible to attribute her fighting spirit and determination to make it in the music business to this sense of abandonment, leading her to be the legend that she was to become.[2]:7 She studied piano at the Detroit Conservatory at the age of 15, but did not exceed a modest level of expertise.[3]

At the age of 16, Carter began singing.[1] As her parents were not big proponents of her pursuing a singing career, she would sneak out at night to audition for amateur shows. After winning first place at her first amateur competition, Carter felt as though she were being accepted into the music world and decided that she must pursue it tirelessly.[4] When she began performing live, she was too young to be admitted into bars, so she obtained a forged birth certificate to gain entry in order to perform.[5]

Even at a young age, Carter was able to bring a new vocal style to jazz. The breathiness of her voice was a characteristic seldom heard before her appearance on the music scene.[6] She also was well known for her passion for scat singing and her strong belief that the throwaway attitude that most jazz musicians approached it with was inappropriate and wasteful due to its spontaneity and basic inventiveness, seldom seen elsewhere.[7][8]

Detroit, where Carter grew up, was a hotbed of jazz growth. After signing with a talent agent after her win at amateur night, Carter had opportunities to perform with famous jazz artists such as Dizzy Gillespie, who visited Detroit for an extensive amount of time. Gillespie is often considered responsible for her strong passion for scatting. In earlier recordings, it is apparent that her scatting had similarities to the qualities of Gillespie's.[9]

At the time of Gillespie's visit, Charlie Parker was receiving treatment in a psychiatric hospital, delaying her encounter with him. However, Carter eventually also received an opportunity to perform with Parker, as well as with his band consisting of Tommy Potter, Max Roach, and Miles Davis. After receiving praise from both Gillespie and Parker for her vocal prowess, Carter felt a strong burst in confidence and knew that she could make it in the business with perseverance.[10]

Carter was right. In 1948, Carter was asked by Lionel Hampton to join his band. She finally had her big break. Working with Hampton's group gave her the chance to be bandmates with artists such as Charles Mingus and Wes Montgomery, as well as with Ernest Harold "Benny" Bailey, who had recently vacated Gillespie's band and Albert Thornton "Al" Grey who would later go on to join Gillespie's band. Hampton obviously had an ear for talent and a love for bebop.[11] Carter too had a deep love for bebop as well as a talent for it. Hampton's wife Gladys gave her the nickname "Betty Bebop", a nickname she reportedly detested. Despite her good ear and charming personality, Carter was fiercely independent and had a tendency to attempt to resist Hampton's direction, while Hampton had a temper and was quick to anger.[12] Hampton expected a lot from his players and did not want them to forget that he was the band's leader.[13] She openly hated his swing style, refused to sing in a swinging way, and she was far too outspoken for his tastes.[14] Carter honed her scat singing ability while on tour, which was not well received by Hampton as he did not enjoy her penchant for improvisation.[12] Over the course of two and a half years, Hampton fired Carter a total of seven times.[1]

Being a part of Hampton's band provided a few things for "The Kid" (a nickname bestowed upon Carter that stuck for the rest of her life): connections, and a new approach to music, making it so that all future musical attitudes that came from Carter bore the mark of Hampton's guidance. Because of Hampton's hiring of Carter, she also goes down in history as one of the last big band era jazz singers in history.[15] However, by 1951, Carter left the band. After a short recuperation back home, Carter was in New York, working all over the city for the better part of the early 1950s, as well as participating in an extensive tour of the south, playing for "camp shows". This work made little to no money, but Carter believed it was necessary in order to develop as an artist, and was a way to "pay her dues".[16]

Very soon after Carter's arrival in New York City, she was given the opportunity to record with King Pleasure and the Ray Bryant Trio, becoming more recognizable and well known and subsequently being granted the chance to sing at the Apollo Theatre. This theatre was notorious for giving up-and-coming artists the final shove into becoming household names.[17] Carter was propelled into notoriety, recording with Epic label by 1955 and was a well-known artist by the late 1950s.[18] Her first solo LP, Out There, was released on the Peacock label in 1958.[2]:70

Miles Davis can be credited for Carter's bump in popularity, as he was the person who recommended to Ray Charles that he take Carter under his wing.[19] Carter began touring with Charles in 1960, then making a recording of duets with him in 1961 (Ray Charles and Betty Carter),[1] including the R&B-chart-topping "Baby, It's Cold Outside", which brought her a measure of popular recognition. In 1963 she toured in Japan with Sonny Rollins. She recorded for various labels during this period, including ABC-Paramount, Atco and United Artists, but was rarely satisfied with the resulting product. After three years of touring with Charles and a total of two recordings together,[20] Carter took a hiatus from recording to marry.[1] She and her husband had two children. However, she continued performing, not wanting to be dependent upon her husband for financial support.[21]

The 1960s became an increasingly difficult time for Carter as she began to slip in fame, refusing to sing contemporary pop music, and her youth fading. Carter was nearly forty years old, which at the time was not conducive to a career in the public eye.[22] Rock and Roll, like pop, was steadily becoming more popular and provided cash flow for labels and recording companies. Carter had to work extremely hard to continue to book gigs because of the jazz decline.[23] Her marriage also was beginning to crumble. By 1971, Carter was single[24] and mainly performing live with a small group consisting of merely a piano, drums, and a bass.[1] The Betty Carter trio was one of very few jazz groups to continue to book gigs in the late 1960s and early 1970s.[23]

Carter created her own record label, Bet-Car Records, in 1969, the sole recording source of Carter's music for the next eighteen years:

....in fact, I think I was probably the first independent label out there in '69. People thought I was crazy when I did it. 'How are you gonna get any distribution?' I mean, 'How are you gonna take care of business and do that yourself?' 'Don't you need somebody else?' I said, 'Listen. Nobody was comin' this way and I wanted the records out there, so I found out that I could do it myself.' So, that's what I did. It's the best thing that ever happened to me. You know. We're talking about '69!

Some of her most famous recordings were originally issued on Bet-Car, including the double album The Audience with Betty Carter (1980). In 1980 she was the subject of a documentary film by Michelle Parkerson, But Then, She's Betty Carter. Carter's approach to music did not concern solely her method of recording and distribution, but also her choice in venues. Carter began performing at colleges and universities,[1] starting in 1972 at Goddard College in Vermont. Carter was excited at this opportunity, as it was since the mid-1960s that Carter had been wanting to visit schools and provide some sort of education for students. She began lecturing along with her musical performances, informing students of the history of jazz and its roots.[25]

By 1975, Carter's life and work prospects began to improve, and Carter was beginning to be able to pick her own jobs once again,[26] touring in Europe, South America, and the United States.[23] In 1976, Carter was a guest live performer on Saturday Night Live′s first season on the air, and was also a performer at the Newport Jazz Festival in 1977 and 1978, carving out a permanent place for herself in the music business as well as in the world of jazz.[23]

In 1977, Carter reached a new high in fame for herself, being lauded by critics, media, and fans for her talent, and even teaching a master class with her past mentor, Dizzy Gillespie, at Harvard.[27] In the last decade of her life, Carter began to receive even wider acclaim and recognition. In 1987 she signed with Verve Records, who reissued most of her Bet-Car albums on CD for the first time and made them available to wider audiences. In 1988 she won a Grammy for her album Look What I Got! and sang in a guest appearance on The Cosby Show (episode "How Do You Get to Carnegie Hall?"). In 1994 she performed at the White House and was a headliner at Verve's 50th anniversary celebration in Carnegie Hall. She was the subject of a 1994 short film by Dick Fontaine, Betty Carter: New All the Time.[28]

In 1997 she was awarded a National Medal of Arts by President Bill Clinton. This award was one of thousands, but Carter considered this medal to be her most important that she received in her lifetime.[23]

Carter continued to perform, tour, and record, as well as search for new talent until she was diagnosed with pancreatic cancer in the summer of 1998. She died on September 26, 1998, at the age of 69, and was later cremated. She was survived by her two sons.[29]

Carter often recruited young accompanists for performances and recordings, insisting that she "learned a lot from these young players, because they're raw and they come up with things that I would never think about doing."[30]

1993 was Carter's biggest year of innovation, creating a program called Jazz Ahead,[31] which took 20 students who were given the opportunity to spend an entire week training and composing with Carter, a program that still exists to this day and is hosted in The Kennedy Center.

This article uses material from the article Betty Carter from the free encyclopedia Wikipedia and it is licensed under the GNU Free Documentation License.

Joseph Haydn Konzert für Violoncello und Orchester C-Dur
Update Required To play the media you will need to either update your browser to a recent version or update your Flash plugin.