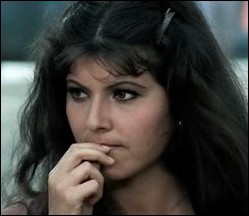 She began her career in show business as an actress playing in musicals, but also in major films such as Rocco e i suoi fratelli (Rocco and His Brothers) by Luchino Visconti and Sodoma e Gomorra (Sodom and Gomorrah) by Robert Aldrich.

In 1963, she met Adriano Celentano on the film set of Uno strano tipo ("A Strange Type"). Surprisingly, Celentano left his girlfriend Milena Cantù, and in 1964 he married Claudia, secretly in the night, at the church of San Francesco in Grosseto. She bore three children: Rosita (1965), Giacomo (1966) and Rosalinda (1968).

In 1964, she acted in Super rapina a Milano ("The Great Robbery in Milan"), the first film directed by Celentano. Since then her acting career suffered a setback, in favor of that as singer, in 1964, in fact, with Non guardarmi ("Do Not Look at Me"), she recorded her first album. The flip side of the vinyl record includes a cover of Little Eva, Quello che ti dico ("What I Say", The Locomotion).

She achieved a big success while singing with her husband, in 1967 with La coppia più bella del mondo ("The Most Beautiful Couple in the World") and in 1970, winning the Sanremo Music Festival, with "Chi non-lavora non-fa l'amore" ("Those who don't work don't make love").[1]

She returned to the film set many years later, in 1971, with her husband in Er più - Storia d'amore e coltello (The best-a story of romance and knife) with Vittorio Caprioli, Romolo Valli, Maurizio Arena and Ninetto Davoli directed by Sergio Corbucci. In 1973 she acted in the film Rugantino, with Adriano Celentano, and played Rosita Flores in L'emigrante ("The Emigrant"), directed by Pasquale Festa Campanile.

In 1974, she recorded the album Fuori tempo ("Out of Time"), collaborating with Paolo Limiti, who wrote the famous song "Buonasera dottore" ("Good Evening Doctor"), sung with Franco Morgan.

In 1975, Claudia participated in Yuppi du, a film directed by Celentano. In the same year, she starred in the film Culastrisce Nobile Veneziano ("Culastrisce Noble Venetian") alongside Marcello Mastroianni.

Another foray into the world of music was in 1977, with release of the album È amore ("It is Love"), with the title song written by Shel Shapiro. It is the first single "Ehi, ehi, ehi" ("Hey, Hey, Hey"), written by Roberto Vecchioni. The LP also contains "Mi vuoi" ("You want me", written by Ivano Fossati and published the following year on a single version of Marcella Bella) and a cover of Roberto Carlos, "Io bella figlia" ("I, Beautiful Daughter").

In 1978, she was Marcella in her husband's film Geppo il folle ("The Crowds"), and in 1979 she took part in the movie Bloodline by Terence Young, with actors like Audrey Hepburn, Ben Gazzara, Irene Papas, Romy Schneider and Omar Sharif.

In 1980, she played Mirandolina in the film La locandiera ("The Landlady of Goldoni"), directed by Paolo Cavara, with Paolo Villaggio and Milena Vukotic.

In 1982, Claudia returned as a guest at the Sanremo Music Festival, singing the known song "Non succederà più" ("Will Not Happen Again"). The song, which enjoyed some commercial success in Spain, France and Germany, contains a vocal interlude by Adriano Celentano. This success helped the couple at an alleged time of crisis, and therefore the text was understood as autobiographical. In 1988 the song was featured in the Soviet movie Igla (Russian: Игла), starring Viktor Tsoi In 1984, she released Claudia canta Adriano, an album where she sings her husband's covers.

In 1985, she acted in the film Joan Lui - Ma un giorno nel paese arrivo io di lunedì ("Joan - But One Day I Arrive in the Country on Monday") and participated at the Sanremo Music Festival with the song "Chiudi la porta" ("Close the Door").

In 1989, she hosted the show Du du du with Pino Caruso; in 1991, she became the CEO of the label Clan Celentano, producing her husband's famous albums, as Mina Celentano (1998). In 1994, Claudia participated at the Sanremo Music Festival with the song "Se mi ami" ("If You Love Me"), written by Toto Cutugno.

In 2009, Claudia Mori released the Claudia Mori Collection, containing a CD with her greatest hits and a DVD with a Celentano family private movie. In September 2009, she joined the X Factor judging panel, with Mara Maionchi and Morgan.

More over, recently she emerged as a TV series and TV movie producer, such as with C'era una volta la città dei matti... ("There Was Once a City of Fools"), with her production company Ciao ragazzi! ("Hello Boys"), winning the Roma FictionFest Special Award for her achievements as a TV producer.

This article uses material from the article Claudia Mori from the free encyclopedia Wikipedia and it is licensed under the GNU Free Documentation License.

Antonio Vivaldi Concerto für Fagott, Streicher und Basso continuo a-moll
Update Required To play the media you will need to either update your browser to a recent version or update your Flash plugin.