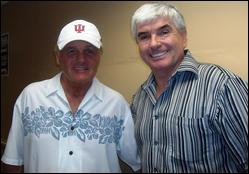 Bruce Arthur Johnston (born Benjamin Baldwin on June 27, 1942) is an American singer, songwriter, and record producer best known as a member of the Beach Boys. In 1965, Johnston joined the band for live performances, filling in for the group's co-founder Brian Wilson, who had quit touring in order to spend more time in the studio. Johnston then became a contributing member on subsequent albums.

As a child, Johnston was adopted by William and Irene Johnston of Chicago and grew up on the West side of Los Angeles in Brentwood and Bel-Air. His adoptive father was president of the Owl Rexall Drug Company in Los Angeles after moving from Walgreens in Chicago. Johnston attended the private Bel Air Town and Country School (later renamed John Thomas Dye School) in Los Angeles and studied classical piano in his early years.

In high school, Johnston switched to contemporary music. He performed in a few "beginning" bands during this time and then moved on to working with young musicians such as Sandy Nelson, Kim Fowley, and Phil Spector. Soon Johnston began backing people such as Ritchie Valens,[2] the Everly Brothers, and Eddie Cochran. In 1959, while still in high school, Johnston arranged and played on his first hit record, "Teen Beat" by Sandy Nelson. The single reached the Billboard Top Ten. The same year, Johnston made his first single under his own name, "Take This Pearl" on Arwin Records (a record label owned by Doris Day) as part of the Bruce & Jerry duo (Jerry Cooper was a high school friend of Bruce's).

In 1960, Johnston started his record production career at Del-Fi Records, producing five singles and an album – Love You So – by Ron Holden (all but two of the album's eleven tracks were written or co-written by Johnston). In 1962 and 1963, Johnston continued his recording career with a series of surfin' singles (vocal & instrumental) and an album, Surfin' 'Round The World, credited to Bruce Johnston, and another "live" album, the Bruce Johnston Surfin' Band's Surfer's Pajama Party. In 1963 came the first collaboration with his friend Terry Melcher (Doris Day's son), a mostly instrumental covers album credited to the Hot Doggers. The first artist the pair produced was a group called the Rip Chords. Johnston and Melcher were now working as staff producers at Columbia Records, Hollywood, and by the time they were producing the million-selling "Hey Little Cobra", a knock-off of the Beach Boys car song vocal style, they also wound up singing every layered vocal part for the recording, using an Ampex three track recording machine. The two of them made a few recordings as Bruce & Terry and the Rogues, but Melcher began to focus more on his production career (with the Byrds, Paul Revere & the Raiders).

On April 9, 1965, Johnston joined the Beach Boys, replacing Glen Campbell, who was playing bass on the road and singing Brian Wilson's vocal parts. Johnston did not start playing bass until his first tenure with the Beach Boys, and the very first vocal recording Johnston made as one of the Beach Boys was "California Girls" (although for contractual reasons he would not be credited or photographed on a Beach Boys album until 1967 on the Wild Honey album). Johnston is frequently credited as one of the original greatest supporters of the Beach Boys' 1966 signature album Pet Sounds. He flew to London in May 1966 and played the album for John Lennon, Paul McCartney, and Keith Moon, who was a Beach Boys fan.[3][4] Johnston wrote several Beach Boys songs: "The Nearest Faraway Place" (instrumental) and notably 1971's "Disney Girls (1957)", which was subsequently recorded by Cass Elliot, Captain & Tennille, Art Garfunkel, Jack Jones, and Doris Day. Johnston also sang lead on three songs from the 1970 Beach Boys album Sunflower: "Tears in the Morning" (which he also wrote), "Deirdre" (Brian co-wrote this song with Bruce), and "At My Window".

Johnston left the Beach Boys in 1972 to embark on a solo career, and wrote the Billboard number one, Barry Manilow hit "I Write the Songs", for which he won a Grammy Award for Song of the Year. "I Write the Songs" has been recorded by over two hundred artists (including Frank Sinatra), and it currently has a cumulative singles/albums worldwide sales figure of twenty-five million copies.

1978–present: Return to the Beach Boys

Johnston returned to the fold in 1978 at Brian Wilson's request to appear on (and co-produce) the album L.A. (Light Album). The following year he was credited as sole producer on the follow-up LP, Keepin' the Summer Alive. Johnston has remained with the Beach Boys ever since and was the only member to continue touring with Mike Love as the Beach Boys after the death of Carl Wilson. In June 2012, Johnston, Brian Wilson, Mike Love, Al Jardine, and David Marks reunited for a new album and 50th anniversary tour.[5] Despite his long involvement with the band, he no longer has a full membership in Brother Records, having traded his shares (but not his artist royalties) in 1972. Johnston still retains his equal ownership of the band's ASCAP publishing company, Wilojarston, and is the only member of the band to have earned a Grammy Award for Song of the Year.

In 1967, he sang on "My World Fell Down", a minor hit for the Gary Usher-led studio group Sagittarius. On his Columbia Records 1977 solo album Going Public, he scored a hit on the disco charts with a dance-oriented remake of the Chantays' hit "Pipeline". Also in 1977, he vocal arranged and sang back-up vocals on Eric Carmen's LP Boats Against the Current and can be heard on the hit single "She Did It", on which he also arranged the vocals. In addition, Johnston wrote backing vocal arrangements and also sang on the recordings for Elton John's "Don't Let the Sun Go Down on Me" and several songs on Pink Floyd's album The Wall.[4]

with the Beach Boys

This article uses material from the article Bruce Johnston from the free encyclopedia Wikipedia and it is licensed under the GNU Free Documentation License.