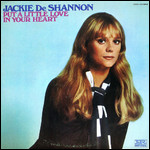 Jackie DeShannon (born August 21, 1941[1][2]) is an American singer-songwriter with a string of hit song credits from the 1960s onwards. She was one of the first female singer-songwriters of the rock 'n' roll period. DeShannon currently is an entertainment broadcast correspondent reporting historical anecdotes and current Beatles band members' news for Breakfast with the Beatles on Sirius XM Satellite Radio on the weekends.

She was born Sharon Lee Myers in Hazel, Kentucky,[3] the daughter of musically inclined farming parents, Sandra Jean and James Erwin Myers, and was singing country tunes on a local radio show at the age of six. By the age of 11, DeShannon was hosting her own radio program. When life on the farm became too difficult, the family moved to Aurora, Illinois, her mother's home town, and her father resumed his other career as a barber. After a year, they moved up the Fox River to Batavia, Illinois, where Sharon attended high school.

In Batavia, the Myers family lived at 713 East Wilson Street. In May 1955, while in 8th grade, Sharon Lee Myers, then 13 years old, was featured in the local newspaper for her vocal talents and personal appearances.[1] According to the Batavia Herald:

The 13-year old youngster, an 8th grade student here [Batavia], also has her own radio show each Saturday morning from radio station WMRO; the program is called Breakfast Melodies.

Recently, Sharon Lee has sung before V.F.W. members during an installation, before a group from the Hines hospital, at the Elgin State hospital and before other organizations.

Though only 13, the youngster can boast almost 11 years of voice training and experience and in the past she has toured most of the south making personal appearances. Also she has sung on radio with a rhythm band for 2 years and has appeared on television 3 times."[1]

In March 1956, "Sherry Lee Myers" made "another guest appearance on Pee Wee King's popular Country and Western Television Show" on Saturday evening, March 3, on Channel 2[2]the CBS network affiliate in Chicago, Illinois. According to the Batavia Herald:

Sherry Lee is a busy young lady. Each Saturday morning at 9:30 she is on the WMRO radio show, Saturday nights she is the vocalist with the valley's Square Dance Band, Don Lee and his Fox Valley Boys. She had made appearances with the Pee Wee King Show at Ottawa, Rockford and LaSalle in recent weeks. Following her television appearance this Saturday night, the young Batavia artist will appear at the West Aurora Junior High School auditorium on Sunday, March 4th for three shows, 2, 4, and 8 P.M.[2]

She attended Batavia High School for two years (1955-1957), and left school after her sophomore year.[4]

She began to record under various names such as Sherry Lee, Jackie Dee, and Jackie Shannon, with mixed success.

Billboard noted (10 June 1957) that Sherry Lee Myers, "16-year old C&W singer of Batavia, Illinois," had recently signed to George Goldner's Gone label in New York as a rockabilly artist, and that her "handlers" (Irving Schacht and Paul Kallett) had changed her name to Jackie Dee. Her only release on Gone included "I'll Be True" (A) and "How Wrong I Was" (B), which appeared in both 78 rpm and 45 rpm versions. Jackie almost certainly sang these songs at the Uptown Theater in Philadelphia on 3 July 1957, and at the Paramount Theater in New York, two weeks later, with Alan Freed's Big Rock 'n' Roll Show.[5]

However, her interpretations of country songs "Buddy" (as Jackie Dee) and "Trouble" (as Jackie Shannon) gained the attention of Rock 'n' Roll star Eddie Cochran, who arranged for her to travel to California to meet his girlfriend, singer-songwriter Sharon Sheeley, who formed a writing partnership with DeShannon in 1960. The partnership produced hits such as "Dum Dum" for Brenda Lee.

In 1960, DeShannon signed with Liberty Records, adopting the name Jackie DeShannon, believed to be the name of an Irish ancestor, after executives at Liberty thought the name Sharon Myers would not help sell records. In a Fresh Air interview (June 14, 2010),[6] DeShannon said that she chose "Jackie" as a cross-gender name. Since she had a low singing voice, she could be heard as either male or female. If thought of as male, she was more likely to sell to female record-buyers, who dominated the market. When she found that "Jackie Dee" was too similar to Brenda Lee, Sandra Dee, et al., she changed it to Jackie Dee Shannon, which people heard as DeShannon. The name stuck.

Armed with her new name, she made the WLS Chicago radio survey with the single "Lonely Girl" in late 1960. A string of mostly flop singles followed, although "The Prince" bubbled under at No. 108 in the United States in early 1962, and "Faded Love" became her first US Billboard Top 100 entry, squeaking in at No. 97 in February 1963.[7]

DeShannon recorded many other singles that encompassed teen pop, country ballads, rockabilly, gospel, and Ray Charles-style soul that didn't fare as well on the charts. During these years it was her songwriting and public profile rather than her recording career that kept her contracted to Liberty. DeShannon dated Elvis Presley and formed friendships with The Everly Brothers and Ricky Nelson. She also co-starred and sang with Bobby Vinton in the teen surf movie Surf Party.

DeShannon's biggest break came in February 1964 when she supported The Beatles on their first US tour, and formed a touring band with guitarist Ry Cooder. DeShannon also wrote "Don't Doubt Yourself Babe" for the debut album of The Byrds. Her music at this stage was heavily influenced by the American West Coast sounds and folk music. Staying briefly in England in 1965, DeShannon formed a songwriting partnership with Jimmy Page, which resulted in the hit singles "Dream Boy" and "Don't Turn Your Back on Me". Page and DeShannon also wrote material for singer Marianne Faithfull, including her Top Ten UK and US hit "Come and Stay With Me". DeShannon also appeared on the television show Ready Steady Go!

Moving to New York, DeShannon co-wrote with Randy Newman, producing such songs as "She Don't Understand Him" and "Did He Call Today Mama?", as well as writing "You Have No Choice" for Delaney Bramlett. In March 1965, DeShannon recorded Burt Bacharach and Hal David's "What the World Needs Now Is Love",[8] which led to club tours and regular appearances on television and went to No. 7 on the US charts and No. 1 in Canada. (DeShannon's recording of the song was subsequently used in the 1969 film Bob & Carol & Ted & Alice.) She appeared in the 1967 film C'mon Let's Live a Little, with Bobby Vee, as a folk singer.

DeShannon continued writing and recording, but it was not until 1969 that she scored her next smash single and album, both entitled "Put a Little Love in Your Heart". The self-penned single sold over one million copies, and was awarded a gold disc.[9] The single "Love Will Find A Way" from the same album was also a moderate hit. Switching to Atlantic Records in 1970 and moving to Los Angeles, DeShannon recorded the critically acclaimed albums Jackie and Your Baby Is A Lady, but they failed to produce the same commercial success as previous releases. In 1973, she was invited by Van Morrison to sing on his Hard Nose the Highway album.

"Put A Little Love In Your Heart" was performed as the closing number at the Music for UNICEF Concert, broadcast worldwide from the United Nations General Assembly in 1979.

While DeShannon has not produced any further Top Ten singles of her own, her songs have been covered by other artists who have converted them into hits. In 1974, she co-wrote "Queen of the Rodeo" and "Bette Davis Eyes" with Donna Weiss for her album New Arrangement.[10] "Bette Davis Eyes" went on to become a worldwide no. 1 single for Kim Carnes in 1981, earning Weiss and DeShannon the 1982 Grammy Award for Song of the Year.

DeShannon also co-wrote "Break-A-Way", recorded by Irma Thomas in 1964 and by Tracey Ullman in 1983. "Put A Little Love In Your Heart" reached Billboard No. 9 in 1989 as a duet by Annie Lennox & Al Green and was also covered by Dolly Parton in 1993. Tom Petty & The Heartbreakers and Stevie Nicks had a Top 40 US hit in 1986 with a cover of "Needles and Pins", which DeShannon originally recorded but did not write. A version of "When You Walk in the Room" by Pam Tillis in 1994 topped the country charts. Another recent cover of "When You Walk in the Room" was in 2004 by ex-ABBA vocalist Agnetha Fältskog, both in her comeback album My Colouring Book and as a UK (no. 34) and European (no. 53) hit single. Country rock artist Chris Hillman, one of the original members of The Byrds, also did a cover of "When You Walk in the Room" on his solo 1998 album "Like a Hurricane".

Jackie was portrayed by singer Liz Phair in an episode of the NBC period drama American Dreams.

On June 17, 2010, Jackie was inducted into the Songwriters Hall of Fame.

Using her continuing access and friendship with Paul McCartney and Ringo Starr, Ms. DeShannon currently appears as a contributing entertainment broadcast correspondent regarding planned and current touring and personal news and publicity pertaining to the two remaining Beatles. She also relates her stories from her unique historical perspective of touring the US as an opening act artist for the Beatles in 1964. Her reports appear on the Breakfast with the Beatles broadcasts on Little Steven's Underground Garage Channel of Sirius XM Satellite Radio on the weekends.

She has a brother, Randy James Myers, with whom she has sometimes written songs. In the mid 1960s, she dated Jimmy Page and Love guitarist Bryan MacLean. It is likely that Jimmy Page wrote the song "Tangerine" (which appeared on the third Led Zeppelin album) after the breakup of his relationship with DeShannon in early 1965. Her first husband was Liberty Records executive Irving "Bud" Dain, whom she married on January 29, 1966 (annulled in 1967).[11] DeShannon has been married to singer/songwriter and film composer Randy Edelman since 1977. They have one son, Noah, born in 1978.[11]

Images of each record from 1956 to 1960, including additional liner notes, are found at "Sweet Sherry: The Early Recording Career of Jackie DeShannon" by Pete Lerner.

Wikiquote has a collection of quotations related to: Jackie DeShannon

This article uses material from the article Jackie DeShannon from the free encyclopedia Wikipedia and it is licensed under the GNU Free Documentation License.