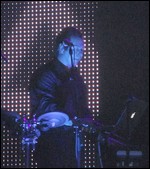 The son of two British immigrants, he began to be interested in electronics while he was at school.[2] After playing in bands in Vancouver, he came to England in 1972,[2] where he found a more creative environment.

He established himself in London, where he formed his first band, along with Huw Lloyd-Langton, future Hawkwind member, on guitar and Rob Rawlinson, later in Overnight Angels, on bass.

Ultravox and other contemporary works

Cann played on the first albums released by Island Records, Ultravox! (1977), Ha! Ha! Ha! (both 1977) and Systems of Romance (1978). After a tour of USA and Canada the band fragmented because of the departure of a vocalist John Foxx (a pseudonym of Leigh) and guitarist Robin Simon. Ultravox replaced them with singer/guitarist Midge Ure in Summer 1979.

During a period of inactivity for Ultravox in mid' 1979 Cann got to know German keyboardist Hans Zimmer, who became his frequent collaborator through mid 80's. Together they played in the backing band of a singer Zaine Griff and appeared with Buggles on their first Top of the Pops appearance in September 1979.

Ure-led Ultravox signed to Chrysalis in 1980 and went on to have a big commercial success worldwide (except for North America). Cann played a notable part in the early advance of the band: he contributed lyrics to 2/3 of the first Ure-led album "Vienna", sang backing vocals, co-lead and even lead on some Ultravox songs: "Mr. X" (1980), "Paths and Angles" (1981), "We Came to Dance" (1982) and "Break Your Back" 1983).

He remained active outside the band during Ultravox success. In 1982 he played acoustic and electronic percussion for Zaine Griff (album "Figvres") and Peter Godwin (single "Images of Heaven"). He and Hans Zimmer were a part of the backing band for a New Romantic singer Ronny on her London show in The Dominion. Ronny also participated in the Helden project, formed by Cann and Zimmer that year, which merged electronic, orchestral and classical influences. Helden were the first music project to play The London Planetarium in March 1983. They released a single "Holding on" (1983) and recorded an album called "Spies" which featured lots of guests (Zaine Griff, Eddie Maelov from Eddie & Sunshine, Brian Robertson from Thin Lizzy etc.). It remains unreleased.

In September 1984 Warren and Hans performed as guests (on drums and leyboards, respectively) on a concert by the popular Spanish band Mecano. Two songs from that show were released in 1985 on LP "En Concierto". Also in 1985 Cann produced a single for the eccentric singer Duffo, "Gonna Send the Boys Around", and took part in the charity single "Doctor in Distress".

Cann's last appearance with Ultravox was on Live Aid in July 1985. He was ousted from the band in May 1986 after the disagreements arose with other band members who started to consider him a problem in the progress of the band (Cann wanted a fully programmed percussion sound while the others preferred a "back-to-basics" approach; that was coupled with his ambition to become a second guitarist in the band and generally troubled rehearsals). In retrospect, Midge Ure considers the firing unjust, unwarranted, and a result of misplaced tensions.[3]

Cann and his technicians were among the first to modify commercially available rhythm units or drum machines, so they could alter and override the preset manufacturer programs. This is notable on "Hiroshima Mon Amour", from the album Ha!-Ha!-Ha!. When Ultravox were recording Vienna, Cann's electronic ventures would become important for the Ultravox sound. The acquisition of a Roland CR-78 proved something of a headache for Cann, as he saw great sonic potential in it, but it had limited pattern programmability. In the process of adding some much needed practical customisations to the CR-78, Cann became somewhat persona non grata at the Roland headquarters in the UK. This did not stop Cann from carrying out his plans, and the result proved to be a key factor in the overall sound of their signature hit song "Vienna".

The initial reaction to the usage of drum machines led to bewilderment among the audience, who wondered what Cann was doing during some songs. Among claims that he was doing nothing, he decided to equip his drum machines with clear perspex cases instead of wood panels, and mount a variety of LEDs inside them as a feature Cann himself described as "absolutely useless, but very impressive looking on a darkened stage; now it would be obvious I was actually doing something." (From Jonas Wårstad's interview at Discog)

In addition to his drum machine work, Cann designed several modifications for bass player Chris Cross' Minimoog, among them a primitive sequencer (built by Roy Gwinn) made from a series of toggle switches to add syncopation to the synthesiser's ability to create a stream of eighth notes, and a proprietary triggering system that allowed Cann and Cross to synchronise the Minimoog with Cann's drum machines, a feat performed almost three years before MIDI was officially introduced in 1983. According to Midge Ure's autobiography, when the Minimoog broke down on tour, Ultravox borrowed one from The Cars, but it didn't help as it lacked the proprietary modifications.

Cann made significant contributions to the drum sounds of New Wave music, both in style and execution. Around 1978, when Ultravox released the Systems of Romance album, Cann's style of drumming turned away from its rock roots and toward what was becoming the New Wave sound. He endeavoured to have extremely precise timing; this would make the songs with live drums match songs driven by electronic, programmed percussion. For an example of this, compare the song "Sleepwalk", where Cann plays live drums, to "Mr. X", where the drums are sequenced. Both of these tracks can be found on Vienna. Despite his machine-like timing, Cann would often do things that neither drum machines nor electronically sequenced percussion could do at the time. Specifically, he would often play very precise triplet fills and crescendos, especially on the snare drum. While these two techniques are easily accomplished by electronic instruments today, around 1979-1982 they were virtually impossible. In essence, it could fool the listeners to believe they were hearing a drum machine, only to prove them wrong through out-performing the rather rudimentary sequencing possibilities of the time.

From a technical perspective, Cann preferred a traditional grip. On the Quartet album and subsequent tour (1982), Cann employed several sets of Simmons SDS-V electronic percussion pads, even to the point where he had an extra kit consisting of the hexagonal Simmons pads, which he played standing up. This way of playing was relatively unique and Cann seemed to be using this setup for one song only, namely "The Song (We Go)" from Quartet.

This article uses material from the article Warren Cann from the free encyclopedia Wikipedia and it is licensed under the GNU Free Documentation License.