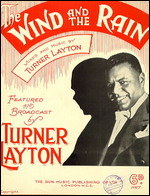 Turner Layton (July 2, 1894 February 6, 1978), born John Turner Layton, Jr., was an American songwriter, singer and pianist. Born in Washington, D.C., in 1894, he was the son of John Turner Layton, "a bass singer, music educator and hymn composer."[1] After receiving a musical education from his father, he attended the Howard University Dental School, later coming to New York City in the early 1900s, where he met future songwriting partner, lyricist Henry Creamer. He is best known for his many compositions with Creamer, the best known of which is the standard "After You've Gone", which was written in 1918 and first popularized by Sophie Tucker. The two contributed music and lyrics to many Broadway shows, including the Ziegfeld Follies of 1917, 1921 and 1922, Three Showers (1920), Some Party (1922) and Creamer's own Strut Miss Lizzie (1922).[1] Beginning in 1924, Layton found major popular success in England with Clarence "Tandy" Johnstone[2] as member of the group Layton & Johnstone, quickly earning a reputation as a cabaret act, with the pair allegedly selling over "10 million records."[3] He split with Johnstone in 1935, with Johnstone returning to New York and continuing to perform with significantly less success and Turner continuing to perform in England. An elegant song stylist, Turner had held a regular, successful spot over the years at the Café de Paris, a London club, until his retirement in 1946. He died in London in February 1978. Two compilation albums of recordings by Layton have been released on CD. His daughter A'Lelia Shirley inherited his musical estate and left the copyright and royalties to her father's music to Great Ormond Street Hospital for Children in London (UK) in her will on her death in January 2001.

This article uses material from the article Turner Layton from the free encyclopedia Wikipedia and it is licensed under the GNU Free Documentation License.