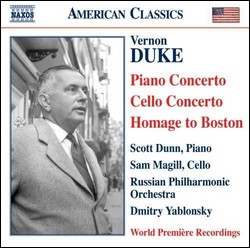 Vernon Duke (10 October [O.S. 27 September] 1903 – 16 January 1969) was an American composer/songwriter, who also wrote under his original name, Vladimir Dukelsky. He is best known for "Taking a Chance on Love" with lyrics by Ted Fetter and John Latouche (1940), "I Can't Get Started" with lyrics by Ira Gershwin (1936), "April in Paris" with lyrics by E. Y. ("Yip") Harburg (1932), and "What Is There To Say" for the Ziegfeld Follies of 1934, also with Harburg. He wrote the words and music for "Autumn in New York" (1934) for the revue Thumbs Up! Vernon collaborated with lyricists such as Johnny Mercer, Ira Gershwin, Ogden Nash and Sammy Cahn.[1]

Vladimir Aleksandrovich Dukelsky (Russian: Владимир Александрович Дукельский) was born in 1903 into a noble family of mixed Georgian-Austrian-Spanish-Russian descent, in Parafianovo, Vilna Governorate, Russian Empire (in present-day Belarus). The 1954 Grove's Dictionary of Music and Musicians referred to "one of his grandparents" (Princess Tumanishvili) as having been "directly descended from the kings of Georgia". His birthplace was a small railroad station in Minsk Governorate. At that time his mother "happened to be traveling by train".[2] The Dukelskys resided in Kiev, and Vladimir's only visit to Saint Petersburg and Moscow occurred in the summer of 1915. The impressions of that remarkable summer were later echoed in Dukelsky's most daring classical composition, the Russian oratorio The End of St. Petersburg (1931–37). The title is a reference to the film The End of St. Petersburg directed by Vsevolod Pudovkin.

At the age of 11, Dukelsky was admitted to the Kiev Conservatory where he studied composition with Reinhold Glière and musical theory with Boleslav Yavorsky. In 1919, his family escaped from the turmoil of civil war in Russia and spent a year and a half with other refugees in Constantinople. In 1921, they obtained American visas and sailed steerage class on the SS King Alexander to New York.

He underwent his immigrant inspection at Ellis Island; on the passenger list, the purser of the King Alexander recorded his name as Vladimir Doukelsky in the French fashion. It was in 1922 in New York that George Gershwin befriended the young immigrant; Gershwin (himself born Jacob Gershowitz) suggested Dukelsky truncate and Americanize his name. Dukelsky's first songs published under his nom de plume were conceived that year, but he continued to write classical music and Russian poetry under his given name until 1955.

In 1924, the restless young man left hospitable America for the Old World. In Paris, he received a commission from Serge Diaghilev to compose a ballet. Dukelsky's first theatrical production, Zephyr and Flora, was staged in the 1925 season of Ballets Russes, with choreography by Léonide Massine and scenography by Georges Braque, to great critical acclaim. In a review of musical novelties of the season, Sergei Prokofiev described it as full of "superior melodies, very well designed, harmonically beautiful and not too 'modernist'." Prokofiev was as impressed with the young talent as Diaghilev was, and soon the composers became close friends. They frequently saw each other until the end of the 1930s and corresponded until 1946, when the attacks of Soviet officialdom on Prokofiev (who returned to Russia in 1938 although Duke urged him not to go) made the further exchange of letters too dangerous for Prokofiev. Dukelsky's First Symphony was premiered by Serge Koussevitzky and his orchestra in 1928 in Paris on the same bill as the excerpts from Prokofiev's The Fiery Angel. Some of Dukelsky's and Prokofiev's compositions of the 1930s bear evidence of the sustaining musical dialogue.

In the late 1920s, Dukelsky shared his time between Paris, where his more classical works were performed, and London where he composed numbers for musical comedies under the pen name of Vernon Duke. In 1929, he returned to the United States with an intention of settling in the country permanently. He composed and published much serious music, but devoted even greater efforts to establishing himself on Broadway. Duke's songs "April in Paris" (1932), "Autumn in New York" (1934), "I Like the Likes of You" (1934), "Water Under the Bridge" (1934), "I Can't Get Started" (1936) were 1930s hits.

The support and devotion of Serge Koussevitzky, who published Dukelsky's chamber music and conducted his orchestral scores, helped him develop his more classical works. Dukelsky's concerto for piano, orchestra and soprano obbligato titled Dédicaces (1935–1937), was premièred by Koussevitzky and the Boston Symphony Orchestra in January 1939 in New York. His oratorio, The End of St. Petersburg, was premiered a year earlier by Schola Cantorum and the New York Philharmonic under Hugh Ross. In 1937, the composer was asked to complete Gershwin's last score, a soundtrack to a Technicolor extravaganza The Goldwyn Follies, for which he contributed two parody ballets, choreographed by George Balanchine, and a song "Spring Again". In 1939, Dukelsky became an American citizen and took Vernon Duke as his legal name. Duke's greatest success came a year later, with the Broadway musical Cabin in the Sky (1940), choreographed by George Balanchine and performed by an all-black cast at the Martin Beck Theater in New York.

Between 1942 and 1944, he joined the Coast Guard and, while in service he discovered Sid Caesar, a saxophone player in the Coast Guard Band, and wrote a touring show for the Coast Guard called Tars & Spars. He also conceived some of his finest music in the classical tradition, including a Cello Concerto (commissioned by Gregor Piatigorsky) and a Violin Concerto.

His pensive Third Symphony (1946) was dedicated to the memory of Koussevitzky's wife, Natalie. With years, both Serge and Natalie Koussevitzky, Dukelsky's devoted supporters, became a sort of surrogate family to him. When Dukelsky's own mother died in 1942, the composer took the conductor's refusal to officially commission this work with great bitterness. The dedication was revoked and the relationship soured.

In 1946, Duke left the United States for France, where he continued his double career of being a classical composer and a songwriter (now setting to music the texts of French lyricists). By 1948, the composer was back in America. He moved from New York to California where he spent his last decades, writing songs, film and theater scores, chamber music, poetry in Russian and polemical articles and memoirs in English. On October 30, 1957, he married singer Kay McCracken. His final appearance on Broadway came less than two weeks later with the two songs and incidental music he wrote for the Helen Hayes show, Jean Anouilh's Time Remembered (1940) (French title: Léocadia) which ran for 247 performances. He continued to try to mount Broadway musicals during the last decade of his life, including two shows that closed during tryouts, and one was never produced.

As a classical composer, Dukelsky used the same musical language as his modernist contemporaries Sergei Prokofiev, Arthur Lourié, and, to a lesser extent, Igor Stravinsky. His harmonies, however, were highly original. As a songwriter and author of theatrical and film music, he was close to George Gershwin and Harold Arlen, but developed an idiosyncratic voice of his own.

Duke died in Santa Monica, California on 16 January 1969, during surgery for lung cancer. His numerous papers — musical and literary manuscripts and correspondence in English, French, and Russian — are now stored in the Musical Division of the Library of Congress.

This article uses material from the article Vernon Duke from the free encyclopedia Wikipedia and it is licensed under the GNU Free Documentation License.