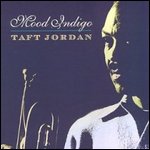 Jordan played early in his career with the Washboard Rhythm Kings before joining Chick Webb's orchestra from 1933 to 1942, remaining there after Ella Fitzgerald became its frontwoman. Jordan and Bobby Stark traded duties as the main trumpet soloist in Webb's orchestra. From 1943 to 1947 he played with Duke Ellington, then with Lucille Dixon at the Savannah Club in New York City from 1949 to 1953. After this he played less often, though he toured with Benny Goodman in 1958, played on Miles Davis's Sketches of Spain, and worked with the New York Jazz Repertory Company. He recorded four tunes as a leader in 1935, and led his own band in 1960–61, when he recorded LPs for Mercury, Aamco Records, and Swingville.

Taft Jordan and The Mob

Jordan recorded 4 titles for ARC (Banner, Melotone, Oriole, Perfect, Romeo) on February 21 and 22, 1935. It was an all-star group consisting of

Two takes were recorded of "Night Wind", "If the Moon Turns Green", "Devil in the Moon", and "Louisiana Fairy Tale" (all were current commercial pop hits). Take 1 of each were rejected versions with vocals by Jordan. ARC issued the take 2 instrumental versions, which were outstandingly arranged swing.

This article uses material from the article Taft Jordan from the free encyclopedia Wikipedia and it is licensed under the GNU Free Documentation License.