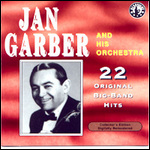 Garber was born in Indianapolis, Indiana. He had his own band by the time he was 21 (around 1917). He became known as "The Idol of the Airwaves" in his heyday of the 1920s and 1930s, playing jazz in the vein of contemporaries such as Paul Whiteman and Guy Lombardo. Garber played violin with the Philadelphia Symphony Orchestra after World War I and formed the Garber-Davis Orchestra with pianist Milton Davis from 1921-1924. After parting with Davis, he formed his own orchestra, playing both "sweet" and "hot" 1920s dance music. He was hit hard by the Great Depression, and in the 1930s, he refashioned his ensemble into a big band and recorded a string of successful records for Victor. During World War II, Garber began playing swing jazz, a rather unexpected turn; his arranger during this time was Gray Rains and his vocalist was Liz Tilton. The recording restrictions in America during the war eventually made his ensemble unfeasible, and he returned to "sweet" music after the war, continuing to lead ensembles nearly up until the time of his death in Shreveport, Louisiana, in 1977.

Garber moved with his family from Indianapolis to Louisville, Kentucky when he was three months old, and lived there until he was 13. The family then moved to a small town near Philadelphia. He was the tenth of 12 children.[2]

This article uses material from the article Jan Garber from the free encyclopedia Wikipedia and it is licensed under the GNU Free Documentation License.