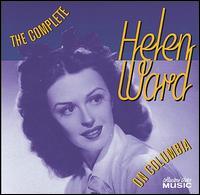 Helen Ward (born September 19, 1913, New York City died April 21, 1998, Arlington, Virginia) was an American singer. Her father had taught her piano, and she appeared on radio broadcasts with WOR and WNYC. She also worked as a staff musician at WNYC.

Starting in 1934, she sang in Benny Goodman's first band, and became one of the first popular swing "girl singers", as they were then called, and among Goodman's most popular. She and Benny had a brief romance and he came very close to proposing marriage to her in either 1935 or 1936. However, according to Ward in the documentary, Adventures in the Kingdom of Swing, he called it off at the last minute, citing his career. She married financier Albert Marx the following year and left the band.

In 1938, Marx arranged for Goodman's Carnegie Hall concert to be recorded for her as an anniversary present. That recording was later released as a dual LP set by Columbia Records in 1950. During the 1940s, Ward worked with the bands of Hal McIntyre and Harry James. She became a radio show producer for WMGM in 1946-1947.[1]

After her marriage to Marx ended, Ward later married the audio engineer William Savory. Savory was part of the team that invented the 33 rpm long-playing record.[2] Ward continued to do sporadic studio work and also worked briefly with Peanuts Hucko. Ward did occasional tours with Goodman in the 1950s, but effectively retired by 1960. She made a brief return in the late 1970s and early 1980s. She returned to singing at New York City clubs in 1979. In 1981, she released her final album, The Helen Ward Song Book Vol. I.

This article uses material from the article Helen Ward (jazz singer) from the free encyclopedia Wikipedia and it is licensed under the GNU Free Documentation License.