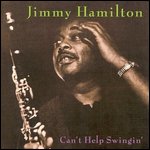 Hamilton was born in Dillon, South Carolina, and grew up in Philadelphia. Having originally learned to play piano and brass instruments, in the 1930s he started playing the latter in local bands, before switching to clarinet and saxophone. In 1939 he played with Lucky Millinder, Jimmy Mundy, and Bill Doggett, going on to join the Teddy Wilson sextet in 1940. After two years with Wilson, he played with Eddie Heywood and Yank Porter.

In 1943, he replaced Barney Bigard in the Duke Ellington orchestra, and stayed with Ellington until 1968. His style was very different on his two instruments: on tenor saxophone he had an R&B sound, while on clarinet he was much more precise and technical. He wrote some of his own material in his time with Ellington.

After he left the Ellington orchestra, Hamilton played and arranged on a freelance basis, before spending the 1970s and 1980s in the Virgin Islands teaching music. On his retirement from teaching he continued to perform with his own groups in 1989 and 1990. Hamilton died September 20, 1994 in St. Croix, Virgin Islands, at the age of 77.

This article uses material from the article Jimmy Hamilton from the free encyclopedia Wikipedia and it is licensed under the GNU Free Documentation License.

Samuel Wesley Sinfonie Nr.6 B-Dur
Update Required To play the media you will need to either update your browser to a recent version or update your Flash plugin.