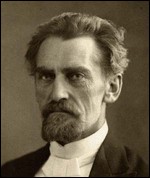 Robert Kajanus (Helsinki, 2 December 1856 – Helsinki, 6 July 1933) was a Finnish conductor and composer. He was of Swedish descent.

Robert Kajanus was the most prominent Finnish composer before Jean Sibelius. His music drew on the folk legends of the Finnish people. He studied music theory with Richard Faltin and violin with Gustaf Niemann in Helsinki, with Hans Richter, Carl Reinecke and Salomon Jadassohn in Leipzig, and Johan Svendsen in Paris.[1]

Kajanus was appointed director of music at the University of Helsinki in 1897 and remained in the post for the next 29 years, a period in which he had a major impact on music education in his native country. He was also the founder of the Nordic Music Festival in 1919. He received many decorations, including the French Légion d'honneur.

Kajanus was the father of the harpists Lilly Kajanus-Blenner (1885-1963) and Aino Kajanus-Mangström (1888-1951) and the violinist Kaj Kajanus (1908-1994); the grandfather of Johanna Kajanus, an award-winning Finnish/Norwegian sculptress; and great-grandfather of pop musician and composer Georg Kajanus, who was famous for a while in Great Britain with his band Sailor which enjoyed chart success in the mid-1970s.

Kajanus composed over 200 works, of which Aino and the Finnish Rhapsodies are enduringly popular. He also orchestrated the Finnish national anthem, Maamme (Our Country) and Christian Fredric Kress's Porilaisten marssi (March of the People of Pori), the honor march of the Suomen puolustusvoimat (Finnish Defense Forces) and thus, effectively, the Finnish presidential march.[2][3]

Kajanus had a decisive impact upon the development of the career of Jean Sibelius. He was considered an authority on the interpretation of Sibelius's music, and he and Sibelius were close friends; but this was compromised in 1898 when Sibelius was appointed to a university post for which Kajanus was himself a candidate. Kajanus appealed, and the decision was overturned. But they reconciled for the orchestra's tour of Europe in 1900, where they appeared at the Exposition Universelle at the invitation of the French government. Kullervo, Sibelius's epic masterpiece, was written in the wake of Kajanus' symphonic poem Aino although Sibelius denied any exertion of influence of this piece over his own work. Additionally, as a conductor, Kajanus was responsible for commissioning one of Sibelius' most popular and enduring works, En Saga, following the success of Kullervo. Pohjola's Daughter was dedicated to Kajanus. When Kajanus took the Helsinki Orchestra on a tour of Europe in 1900 both he and Sibelius conducted, including what proved to be the first performances of Sibelius's music outside of Finland. This ensured the spread of the young composer's reputation far beyond the borders of his homeland, the first Finnish composer to receive such attention.

Kajanus was the first to make recordings of Sibelius's First, Second, Third and Fifth symphonies and Tapiola. They were recorded in the early 1930s, with the London Symphony Orchestra. The relationship between Kajanus and Sibelius was such that his interpretations of the composer's music are usually regarded as authentic.[5]

In 1930, the Finnish government and Britain's EMI-Columbia label, perceiving a potentially wide audience for the composer's work, jointly arrange to record Sibelius's first two symphonies, and Kajanus was selected to record both at the insistence of the composer. In 1932 Kajanus recorded Symphonies Nos. 3 and 5, along with orchestral suites and tone poems. This was a massive recording project for the work of a living composer, and the recordings have been considered definitive for many years and are regarded as necessary listening in the study of Sibelius. Only his death in July 1933, at the age of 76, prevented Kajanus from recording all of Sibelius' works.

This article uses material from the article Robert Kajanus from the free encyclopedia Wikipedia and it is licensed under the GNU Free Documentation License.