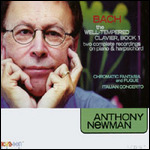 Anthony Newman (born May 12, 1941) is an American classical musician. While mostly known as an organist, Newman is also a harpsichordist, pedal harpsichordist, pianist, fortepianist, conductor, writer, and teacher. A specialist in music of the Baroque period, particularly the works of Johann Sebastian Bach, Newman has played an important role in the movement towards historically informed performance. He has collaborated with noted musicians such as Kathleen Battle, Julius Baker, Itzhak Perlman, Eugenia Zukerman, Jean-Pierre Rampal, Leonard Bernstein and Wynton Marsalis for whom he arranged and conducted In Gabriels Garden, the most popular classical record of 1996.[1][2]

Newman was born in Los Angeles, California. His father was a lawyer and his mother was a professional dancer and an amateur pianist. Newman started playing the piano by ear at age four and could read music before he could read words.[3] He was five when he first heard the music of J.S. Bach (the fifth Brandenburg Concerto)[4] and was "delighted, elated and fascinated"[5] At five he began piano lessons but decided to add organ after hearing his first Bach organ music (Toccata and Fugue in D minor). He had to wait until he was ten to begin organ lessons because before then his feet would not reach the pedals.[4] From the age of ten to seventeen he studied the organ with Richard Keys Biggs.[6]

Newman's professional debut, in which he played Bach organ works on the pedal harpsichord, took place at the Carnegie Recital Hall in New York in 1967. Of this performance the New York Times wrote, "His driving rhythms and formidable technical mastery...and intellectually cool understanding of the structures moved his audience to cheers at the endings."[8] Based solely on the Times review, and without an audition, Columbia Records signed Newman to a recording contract. Clive Davis, head of Columbia Records, took his cue from the prevailing anti-establishment sentiment among young people and Newman's long hair and interest in Zen meditation and marketed Newman as a counterculture champion of Bach would could draw young audiences.[7] As a result, according to Newman, it took some years for him to "live down" the image created by Davis and to be taken seriously in the classical music world.[9] But Newman did indeed draw young audiences as noted by Time magazine in a 1971 article in which they dubbed him the "high priest of the harpsichord."[10] After recording twelve albums for Columbia Records Newman left along with pianist André Watts, another of Davis' protégés, when Davis left Columbia in 1979.[11] Newman has gone on to make solo recordings for a variety of labels including Digitech, Excelsior, Helicon, Infinity Digital/Sony, Moss Music Group/Vox, Newport Classic, Second Hearing, Sheffield, Sine Qua Non, Sony, Deutsch Grammophon, and 903 Records.[6] Newman has recorded most of Bach's keyboard works on organ, harpsichord and piano as well as recording works of Scarlatti, Handel, and Couperin. On the fortepiano he has recorded the works of Beethoven and Mozart. As a conductor Newman has led international orchestras such as the Madeira Festival Orchestra, the Brandenburg Collegium, and the English Chamber Orchestra.[6]

For thirty years, starting in 1968, while Newman continued to record, concertize, compose, conduct and write, he taught music at The Juilliard School, Indiana University, and State University of New York at Purchase.[12]

Although initially intensely interested in composition, he became discouraged by the non-tonal music that was the focus of conservatory composition departments in the 50s and 60s.[5][13] He returned to composition in the 1980s and developed a post-modern compositional style that took over from where pre-atonal post-modernism left off. He makes use of musical archetypes from the 17th, 18th, and 19th centuries as well as 20th century archetypes he has devised himself with the intent making new but accessible music.[14][15] Newman has written music for a range of instruments including organ, harpsichord, orchestra, guitar, violin, cello, flute chamber ensemble, piano, choral music and opera.[6] In 2011, Newman released a 20-CD set of his most important compositions on 903 Records.

Newman is music director of Bach Works and Bedford Chamber Concerts, is on the Visiting Committee for the Department of Musical Instruments at the Metropolitan Museum of Art and is on the board of Musical Quarterly magazine.

From the beginning Newman's interpretation of the music of J.S. Bach brought disdain from many musicians. A common complaint is that he plays too fast and that he takes excessive liberties with rhythm and ornamentation. According to Newman, the traditional approach to Bach began 100 years after Bach's death and is misguided by a mystique and reverence for the composer that results in performances which are slow, rhythmically restrained and without the vivification of ornamentation.[7][16] In contrast, Newman's recordings of Bach are considered exciting even by those who are skeptical of the validity of his interpretations.[17][18] In Newman's scholarly text, Bach and the Baroque, published in 1985 and revised in 1995, Newman supports his performance of Baroque music with a thorough analysis based on contemporary 17th and 18th century sources. Newman discusses how alterations to the written music - rhythmic variations such as rubato and notes inégale[19] as well as improvised ornamentation - were common in Bach's time and that fast movements were played faster than has been traditionally accepted. Scholarly opposition to Newman's approach was led by Frederick Neumann who had long-held that notes inégal were limited primarily to French performance practice and that Bach, who traveled relatively little, would not have been exposed to this technique.[20] In reviewing Newman's Bach and the Baroque in 1987 Neumann was at first somewhat gracious calling Newman "...a splendid keyboard performer who can dazzle his audiences with brilliant virtuosic feats. He can, and often does, play faster than perhaps any of his colleagues, and shows occasionally other signs of eccentricity."[21] However he takes Newman to task for "careless scholarship" citing misuse of terms such as tactus and misinterpretation of Bach's notation. But his most enthusiastic objections are to Newman's defense of the use of notes inégal in the performance of Bach. Most of Neumann's complaints question the validity of Newman's sources.[22]

Music critics too have been of two minds about Newman's interpretations of Bach, as illustrated in the following excerps from the New York Times:

Over time Newman's fast tempos have become relatively common in the performance of Bach's works[2] and his championing of the use of original instruments foreshadowed the historically informed performance movement in America by at least ten years.[26]

Although raised in a Catholic family, Newman abandoned strict Roman Christianity at age 20 and at 28 became a follower of Zen Buddhism. He has practiced meditation several hours a day since then.[7] Newman was a volunteer at the hospice unit of Stamford Hospital from 1995 to 2004. Since 1968 he has been married to record producer, conductor, organist and harpsichordist Mary Jane Newman. They have three children.

This article uses material from the article Anthony Newman (musician) from the free encyclopedia Wikipedia and it is licensed under the GNU Free Documentation License.