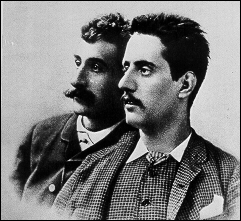 Ferdinando Fontana (30 January 1850 10 May 1919) was an Italian journalist, dramatist, and poet. He is best known today for having written the libretti of the first two operas by Giacomo Puccini Le Villi and Edgar.

Born at Milan into a family of artists - both his father Carlo and his brother Roberto were painters - he entered a Barnabite school at the age of seven and then went on to study at the Collegio Zambelli. He was forced to abandon his studies while still young to provide for himself and his two younger sisters following the death of their mother. During that period, he worked in a series of menial jobs before becoming a copy editor for the Corriere di Milano. This brought him into contact with the world of journalism and literature, which was to become his career.

An exponent of the second Scapigliatura artistic movement, Fontana was a very versatile writer. Apart from his plays and opera libretti, he wrote poems (in both Italian and Milanese dialect), travel books, and articles in various Italian newspapers, including Corriere della Sera. From 1878 to 1879 he was the Berlin correspondent for the Gazzetta Piemontese (today La Stampa).

During his time in Milan, Fontana wrote two plays in Milanese dialect, La Pina Madamin and La Statôa del sciôr Incioda. Both had considerable success and starred Edoardo Ferravilla, considered one of the greatest comic actors in Milanese theatre. He wrote numerous libretti, including two for Alberto Franchetti (Asrael and Zoroastro) and two for Puccini (Le Villi and Edgar). He also translated several operetta libretti for performance in Italy, including Franz Lehár's Die lustige Witwe (The Merry Widow) and Der Graf von Luxemburg (The Count of Luxembourg), Oskar Nedbal's Polenblut (Polish Blood), and Edmund Eysler's Der Frauenfresser (The Woman-Eater). Early in his career, Fontana's output was prodigious: an 1886 article in La Stampa said that at the time, 13 new libretti by Fontana were being composed by 12 different composers.[1]

A committed and passionate socialist, he took part in the Milanese demonstrations in 1898 which led to the Bava-Beccaris massacre. Because of the repressions which followed, he fled to Switzerland where he first lived in Montagnola, a small town near Lugano. He remained in Switzerland until his death, living a modest life, and greatly reducing his literary activities.

Unless indicated otherwise, the texts were opera libretti.

This article uses material from the article Ferdinando Fontana from the free encyclopedia Wikipedia and it is licensed under the GNU Free Documentation License.

Felice Radicati Minuetto aus dem Streichquartett op. 16 Nr. 1
Update Required To play the media you will need to either update your browser to a recent version or update your Flash plugin.