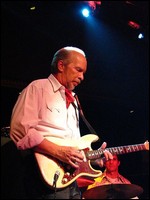 David Albert "Dave" Alvin (born November 11, 1955, in Downey, California), is a Grammy award-winning guitarist, singer-songwriter and a proponent of Americana (music). He is a former member of The Blasters, X, and The Knitters.

Alvin and his older brother Phil grew up in Downey, California. As teenagers, they attended blues, rockabilly, and country venues and listened to the music of T-Bone Walker, Big Joe Turner, and Lee Allen.[1]

In 1979, Alvin and his brother formed a roots rock band called The Blasters with fellow residents Bill Bateman and John Bazz.[1] Despite a growing fan base in the United States and Europe, Alvin left the band in 1986 and became the lead guitarist of the band, X. Alvin then left X to work on a solo project after they recorded their album See How We Are. Alvin became a member of country band The Knitters and appeared on their 1987 album Poor Little Critter on the Road and their 2005 follow-up, The Modern Sounds of The Knitters.[1]

In the early 1980s Alvin, along with fellow Blasters members Bill Bateman and Steve Berlin, performed on several albums by the Los Angeles punk band The Flesh Eaters. Alvin also played with The Gun Club and appeared on two songs from their 1984 album, The Las Vegas Story.

Alvin's first solo album, entitled Romeo's Escape (entitled Every Night About This Time in England) was well received by critics but didn't fare well in the marketplace and Alvin lost his recording contract with Columbia records. Alvin toured with Mojo Nixon and Country Dick Montana under the name Pleasure Barons and released a live album of their 1993 tour.

In 1989, Dwight Yoakam recorded Alvin's song "Long White Cadillac".[1] Alvin released his album Blue Blvd Hightone Records in 1991 and received positive reviews and moderate sales. After releasing Museum of Heart in 1993, Alvin recorded an album of acoustic music in 1994 called King of California. In 2000, Alvin recorded a collection of traditional folk and blues classics called, Public Domain: Songs From the Wild Land, which earned him a Grammy award for Best Contemporary Folk Album.

In 2011, Alvin released the album Eleven Eleven on Yep Roc Records. The album was a return to Alvin's rock roots and [2] Rolling Stone magazine called him "an under recognized guitar hero."

He has published two books of poetry: Any Rough Times Are Now Behind You and Nana, Big Joe & the Fourth of July. His poetry has appeared in Caffeine, the A.K.A. Review, Rattler, Asymptote and Enclitic and in the anthologies: Nude Erections, Hit And Run Poets and Poetry Loves PoetryAn Anthology of Los Angeles Poets. He appeared in the movies Border Radio and Floundering and on the FX television series "Justified" in 2011 as well as on Streets of Fire with The Blasters in 1984.

The song "Dark Eyes", from the album "Public Domain", can be heard playing over the radio during the third season of Six Feet Under in the episode, "You Never Know". The song "Dark Night", as recorded by The Blasters plays over the opening sequence of the movie "From Dusk till Dawn". The song "So Long Baby Goodbye", as recorded by The Blasters, plays over a scene in the film "Bull Durham". He makes an appearance and sings "Harlan County Line" in "I of the Storm" Episode 3 of Season 2 of "Justified" Air date: February 23, 2011.

This article uses material from the article Dave Alvin from the free encyclopedia Wikipedia and it is licensed under the GNU Free Documentation License.