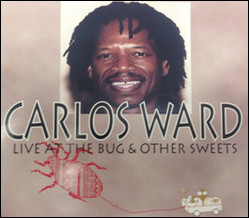 Carlos Ward (born May 1, 1940 in Ancón, Panama) is a jazz alto saxophonist and flautist. He is best known as a sideman.

Carlos Ward's first instrument was the clarinet at the age of 13 when he lived in Seattle, Washington, where he had relocated from Panama City. Later he attended the Navy School of Music and worked with Albert Mangelsdorff when he was stationed in Germany.

His first major effort was his work with John Coltrane in the period 1965-66,[1] although not appearing on any records.

He recorded with Karl Berger's Quartet on ESP (1966), with Henry Grimes and Ed Blackwell. The same quartet, with Dave Holland in place of Henry Grimes, recorded for MIlestone in 1968.

He had a long-lasting association with Don Cherry: from The Third World (also with Abdullah Ibrahim) through his appearance as featured soloist on the 1973 recording of Cherry's Relativity Suite to the band Nu during the 1980s and beyond.

His duet association with pianist Abdullah Ibrahim has also been significant to his career.[2]

Ward was a member of Cecil Taylor's group in the period immediately after altoist Jimmy Lyons death in 1986.

He also was a member of The Ed Blackwell Project, and led his own quartet in 1987.[3]

With the Ed Blackwell Project

With Don Pullen & The African-Brazilian Connection

With Roswell Rudd and the Jazz Composers Orchestra

This article uses material from the article Carlos Ward from the free encyclopedia Wikipedia and it is licensed under the GNU Free Documentation License.