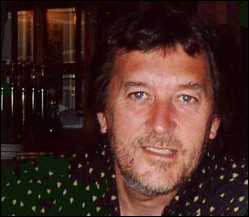 Keith Hopwood (born 26 October 1946, Davyhulme, Urmston, Lancashire [1]) served as rhythm guitarist / backing vocalist for the 1960s pop band, Herman's Hermits. Hopwood also served as a keyboardist and backing guitarist for the post Peter Noone outfit, Sour Mash, which recorded an unreleased album, "A Whale of a Tale" for RCA.

A talented musician and composer, he continues to live and work in the music industry in the UK. Several rare demo recordings from his time in Herman's Hermits are available through his website. Peter Noone credits his old friend with coming up with the idea of recording "Mrs. Brown, You've Got a Lovely Daughter" as an after thought, when Herman's Hermits were short of material for their first album. Noone's heavily accented delivery, together with Hopwood's muted rhythm guitar work, propelled the track to number one on the U.S. Billboard Hot 100 chart. Contrary to many erroneous reports, the song was not an old music hall number, and the Hermits did in fact play on the track as well as on many other Herman's Hermits records including all of the band's number one U.S. and U.K. hits.(see various Peter Noone and Hopwood interviews).

Ralph McTell recorded the theme tune to Cosgrove Hall's adaptation of Wind in the Willows written by Hopwood and Malcolm Rowe, and this was released as a single in 1984, after the series was aired on ITV.

In 1968, Keith Hopwood and Derek Leckenby founded Pluto Music, a company that composes musical scores for commercials, films, and animation. Leckenby died in 1994, but Hopwood continues operating the company. Pluto Studios has been very successful providing services to many top acts, including The Clash. Hopwood has proved himself a fine soundtrack composer, working mostly on animated television series including the hugely successful "Bob the Builder." Always a composer, he wrote and co-wrote numerous songs recorded by Herman's Hermits, and other bands such as Brinsley Schwarz. Hopwood also promoted the singer-songwriter, Helen Watson.

This article uses material from the article Keith Hopwood from the free encyclopedia Wikipedia and it is licensed under the GNU Free Documentation License.