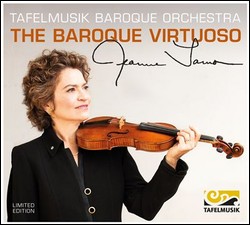 Lamon, born in New York City and raised in the state of New York, began studying the violin at the age of seven. She studied violin at the Westchester Conservatory of Music with Editha Braham and Gabriel Banat. Later she attended Brandeis University in Boston where she earned a Bachelor of Music degree studying violin with Robert Koff, the original second violinist of the Juilliard Quartet. From Brandeis University, Lamon left the USA to study in the Netherlands with Herman Krebbers, then the concertmaster of the Concertgebouw Orchestra in Amsterdam.

She returned to North America in the mid-1970s to establish her career as a baroque specialist. Lamon held the position of concertmaster for and appeared in solo performances with many prestigious ensembles and orchestras in the USA and became in 1974 the first violinist to win the prestigious Erwin Bodky Award for Excellence in the Performance of Early Music.

In the late 1970s, while teaching in the Early Music Department of Smith College in Massachusetts, Jeanne made two guest appearances in Canada with the Tafelmusik Baroque Orchestra, which resulted in an invitation in 1981 offering her the position of Music Director. Lamon has resided in Toronto since 1981 and became a Canadian citizen in 1988.

Under Lamon's leadership, Tafelmusik has achieved international stature and is considered one of the best ensembles in its field with recordings for various labels, including Philips, Nonesuch, CBC Records, Sony Classical and Analekta. Her solo recordings include Vivaldi's The Four Seasons, the Juno Award-winning Bach Brandenburg Concertos and the Bach Violin Concertos, among others.

Lamon teaches at University of Toronto and the Royal Conservatory of Music in Toronto. She received an honorary Doctor of Letters from York University in 1994. In 1996, she became the first recipient of the Muriel Sherrin Award which is presented by the Toronto Arts Council Foundation to artists and creators who have excelled at international initiatives in the fields of music or dance. In 1997, the Alliance Française of Toronto awarded Lamon its newly created Prix Alliance for her contributions to cultural exchanges and artistic ties between Canada and France. In September 1997, Lamon received the Joan Chalmers Award for Creativity and Excellence in the Arts for her artistic direction of Tafelmusik.

In March 1999, the Canada Council for the Arts awarded her the 1998 Molson Prize in the Arts, recognizing her outstanding lifetime contribution to the cultural and intellectual life of Canada.

In October 2012, Lamon announced that after 33 years of directing Tafelmusik, she would be stepping down as full-time music director after the 2013/14 season after a career of recording, performing, and touring.

This article uses material from the article Jeanne Lamon from the free encyclopedia Wikipedia and it is licensed under the GNU Free Documentation License.

Michael Kleofas Oginski Menuett für Klavier a-moll
Update Required To play the media you will need to either update your browser to a recent version or update your Flash plugin.