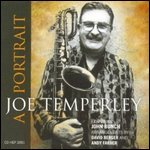 Joe Temperley (September 20, 1929 – May 11, 2016) was a Scottish jazz saxophonist. He performed with various instruments, but was most associated with the baritone saxophone, soprano saxophone, and bass clarinet.

Temperley was born in Cowdenbeath on 20 September 1927 and grew up in Lochgelly.[1] His father was a bus driver.[2]

Temperley first played cornet, aged 12,[1] then started on saxophone at the age of 14.[3] Six months later, he got his first job at the Glasgow-based Tommy Sampson's Orchestra, having previously played in local dance bands.[3] He joined Humphrey Lyttelton's London-based band in 1957 and stayed until 1965, when he moved to the US.[2] After six months, he was recruited by Woody Herman, with whom he toured for two years.[2]

He also performed or recorded Buddy Rich, Joe Henderson, Duke Pearson, the Jazz Composer's Orchestra, The Thad Jones/Mel Lewis Orchestra, and Clark Terry among many others. In October 1974, he toured and recorded with the Duke Ellington Orchestra as a replacement for Harry Carney.[3]

He was a guest mentor of the Fife Youth Jazz Orchestra programme in Scotland.[4] He was an original member of the Jazz at Lincoln Center Orchestra, and served on the faculty of the Juilliard School for Jazz Studies.[5]

This article uses material from the article Joe Temperley from the free encyclopedia Wikipedia and it is licensed under the GNU Free Documentation License.