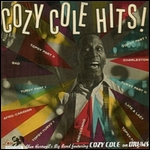 William Randolph Cole was born in 1909 in East Orange, New Jersey. His first music job was with Wilbur Sweatman in 1928. In 1930 he played for Jelly Roll Morton's Red Hot Peppers, recording an early drum solo on "Load of Cole". He spent 1931–33 with Blanche Calloway, 1933–34 with Benny Carter, 1935–36 with Willie Bryant, 1936–38 with Stuff Smith's small combo, and 1938–42 with Cab Calloway. In 1942, he was hired by CBS Radio music director Raymond Scott as part of network radio's first mixed-race orchestra. After that he played with Louis Armstrong's All Stars.

Cole appeared in music-related films, including a brief cameo in Don't Knock the Rock. Throughout the 1960s and 1970s he continued to perform in a variety of settings. Cole and Gene Krupa often played drum duets at the Metropole in New York City during the 1950s and 1960s.

Cole is cited as an influence by many contemporary rock drummers, including Cozy Powell, who took his nickname "Cozy" from Cole. In 1981, he died of cancer in Columbus, Ohio.

This article uses material from the article Cozy Cole from the free encyclopedia Wikipedia and it is licensed under the GNU Free Documentation License.