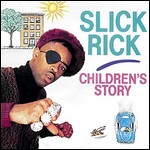 Richard Walters (born 14 January 1965), better known by his stage name Slick Rick, is a Grammy-nominated British rapper. He has also been known as Rick the Ruler. He began his career in late 1983, in the hip hop genre, where he recorded a series of acclaimed recordings such as "La Di Da Di" and "Children's Story". He is known for the use of narrative in his raps and has been called "hip hop's greatest storyteller."[1]

In the south-west London district of Mitcham Walters was born and raised, but then he later moved with his British Jamaican family to The Bronx in 1977 where he met Dana Dane with whom he later formed a hip hop duo known as the Kangol Crew. Walters received his characteristic eye patch after being blinded in the right eye by broken glass as an infant.[4] Once he gained a degree of wealth, Walters earned a reputation for wearing a significant amount of gold and diamond jewelry.

In 1990, Walters shot a bystander and his cousin whom he had hired as a bodyguard and who later admitted to having Walters shot outside a club. Walters was indicted on two counts of attempted murder and pled guilty to all charges, which included assault, use of a firearm, and criminal possession of a weapon. He spent five years in prison, two for the second degree attempted murder charges he received for the shooting, and three for his struggle with the Immigration and Naturalization Services over his residency in the US. He was bailed out by Russell Simmons, head of Def Jam Records. After being bailed out Walters recorded his second album, The Ruler's Back. The album got mixed reviews and wasn't as commercially successful as his debut. In the documentary film, The Show, Russell Simmons interviews Walters while he was imprisoned on Rikers Island.[5]

Walters' third studio album Behind Bars was released while he was still incarcerated. It was met with lukewarm sales and reviews. After being released from prison in 1996, Walters remained with the Def Jam label and on May 25, 1999, released a fourth album entitled The Art of Storytelling. Generally considered the authentic follow up to his 1988 debut, The Art of Storytelling was an artistically successful comeback album that paired him with prolific MCs like Nas, OutKast, Raekwon, and Snoop Dogg among others. On October 6, 2008, Rick was honoured on the VH1 Hip Hop Honors show.

"La Di Da Di", "Mona Lisa" and "Children's Story" are among Walters most well known songs, with "La Di Da Di" being covered nearly word-for-word by Snoop Dogg on his 1993 album Doggystyle. Lines from "La Di Da Di" were borrowed by other multiple high profile artists. "Children's Story" was sampled by Montell Jordan for his 1995 hit, "This Is How We Do It", and rapper Everlast covered the song for his album Eat at Whitey's. Rapper Eminem also borrowed from the song extensively in his diss track "Can-I-Bitch". "Children's Story" was covered with similar lyrics by the MC duo Black Star on their 1998 album Mos Def and Talib Kweli are Black Star, as well as by Tricky on the album Nearly God. It was also paid tribute to by A Tribe Called Quest on their song "8 Million Stories". With a similar backing and very similar lyrics, rapper The Game also made a similar song which was named "Compton Story". "Compton Story" was on the Mixtape BWS Radio 5 made in 2008. The chorus of Notorious B.I.G.'s song "Hypnotize" is also derived from "La Di Da Di". The opening track on Jay-Z's Blueprint albumn is also a cover of Slick Rick's "The Rulers Back" and borrows heavily from the original lyrics. The Israeli Rapper Sagol 59 Made a Hebrew version of the song "Children's Story" on his album "The Two Sides of Sagol 59".

Slick Rick and the Soul Rebels Brass Band collaborated on June 21, 2012 in Washington DC at the historic Howard Theatre which re-opened in April 2012.[6]

Slick Rick has been referenced in numerous songs:

Slick Ricks style is commended by music critics. Music journalist Peter Shapiro says, 'Children's Story' was important because of its narrative structure and Ricks understanding of how crucial little sonic detailssuch as his use of a female voice and his yawning rapwere to hip hop style.[7]

He is largely known for his story raps, such as Childrens Story and La Di Da Di'. Shapiro writes that he "largely introduced the art of narrative into hip hop none of the spinners of picaresque rhymes who followed did it with the same grace or humor.[8] Allmusic states that he has the reputation as hip hop's greatest storyteller.[1] In the book Check the Technique, Slick Rick says, I was never the type to say freestyle raps, I usually tell a story, and to do that well Ive always had to work things out beforehand.[9] Kool Moe Dee comments, Slick Rick raised the lost art of hip hop storytelling to a level never seen again.[10] Devin the Dude notes that Slick Ricks Indian Girl is a good example of the type of humor that existed in hip hops golden era,[11] and Peter Shapiro says that he was funnier than Rudy Ray Moore or Redd Foxx.[7]

Slick Rick uses very clear enunciation and raps with the Queens English.[7] O.C. states: The Great Adventures of Slick Rick is one of the greatest albums ever the stuff he was just saying on there, it was so clear the [clear] syllable dude was Slick Rick for me.[12] He is also renowned for his unique smooth, British-tinged flow[9] which contains distinct structures. In the book How to Rap, it is noted that on the song I Own America, he puts a rest on almost every other 1 beat so that each set of two lines begins with a rest.[13] Kool Moe Dee stated that, Rick accomplished being totally original at a time when most MCs were using very similar cadences.[14] He has what is described as singsong cadences;[1] Andy Cat of Ugly Duckling mentions that Slick Rick uses a melodic delivery on the track Hey Young World.[15] Slick Rick is also known to extensively use punch ins, especially in his story rhymes as different characters;[16] Kool Moe Dee says Rick used multi-voices to portray multiple characters.[10]

Rumours suggested that Walters planned to release a new album, "The Adventure Continues," in 2007. However, in a recent XXL Magazine interview, he denied the claim.[17] Rick is supposedly "waiting for a market to open up for a mature audience."

After performing on a Caribbean cruise ship in June 2001, Walters was arrested by the Immigration and Naturalization Service (INS) as he re-entered the United States through Florida. He was promptly told that he was being deported under a law allowing deportation of foreigners convicted of felonies. Rick was continuously refused bail, but after 17 months in prison he was released on November 7, 2003.[18][19] In October 2006, the Department of Homeland Security began a new attempt to deport Walters,[20] moving the case from the United States Court of Appeals for the Second Circuit based in New York to the more conservative Eleventh Circuit. The court is based in Atlanta, Georgia but the trial was expected to proceed in Florida, where immigration agents originally arrested Walters.

On May 23, 2008, New York Governor David Paterson granted Slick Rick a full and unconditional pardon on the attempted murder charges.[21] The governor was pleased with his behavior since the mishap. Slick Rick has volunteered his time to mentor kids about violence.[22]

This article uses material from the article Slick Rick from the free encyclopedia Wikipedia and it is licensed under the GNU Free Documentation License.