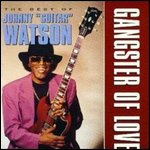 John "Johnny 'Guitar'" Watson, Jr. (February 3, 1935 – May 17, 1996) was an American blues, soul, and funk musician and singer-songwriter.[1] A flamboyant showman and electric guitarist in the style of T-Bone Walker, Watson recorded throughout the 1950s and 1960s with some success. His creative reinvention in the 1970s with disco and funk overtones, saw Watson have hits with "Ain't That a Bitch", "I Need It" and "Superman Lover". His successful recording career spanned forty years, with his biggest hit being the 1977 "A Real Mother For Ya".[2]

Watson was born in Houston, Texas.[3] His father John Sr. was a pianist, and taught his son the instrument. But young Watson was immediately attracted to the sound of the guitar, in particular the electric guitar as played by T-Bone Walker and Clarence "Gatemouth" Brown.

His grandfather, a preacher, was also musical. "My grandfather used to sing while he'd play guitar in church, man," Watson reflected many years later. When Johnny was 11, his grandfather offered to give him a guitar if, and only if, the boy didn't play any of the "devil's music". Watson agreed, but "that was the first thing I did." A musical prodigy, Watson played with Texas bluesmen Albert Collins and Johnny Copeland. His parents separated in 1950, when he was 15. His mother moved to Los Angeles, and took Watson with her.

In his new city, Watson won several local talent shows. This led to his employment, while still a teenager, with jump blues-style bands such as Chuck Higgins's Mellotones and Amos Milburn. He worked as a vocalist, pianist, and guitarist. He quickly made a name for himself in the African-American juke joints of the West Coast, where he first recorded for Federal Records in 1952.[4] He was billed as Young John Watson until 1954. That year, he saw the Joan Crawford film Johnny Guitar, and a new stage name was born.

Watson affected a swaggering, yet humorous personality, indulging a taste for flashy clothes and wild showmanship on stage. His "attacking" style of playing, without a plectrum, resulted in him often needing to change the strings on his guitar once or twice a show, because he "stressified on them" so much, as he put it.[5] Watson's ferocious "Space Guitar" album of 1954 pioneered guitar feedback and reverb. Watson would later influence a subsequent generation of guitarists. His song "Gangster of Love" was first released on Keen Records in 1957. It did not appear in the charts at the time, but was later re-recorded and became a hit in 1978, becoming Watson's "most famous song".[6]

He toured and recorded with his friend Larry Williams, as well as Little Richard, Don and Dewey, The Olympics, Johnny Otis and, in the mid-1970s with David Axelrod. In 1975 he is a guest performer on two tracks (flambe vocals on the out-choruses of "San Ber'dino" and "Andy") on the Frank Zappa album One Size Fits All.[7] He also played with Sam Cooke, Herb Alpert and George Duke. But as the popularity of blues declined and the era of soul music dawned in the 1960s, Watson transformed himself from southern blues singer with pompadour into urban soul singer in a pimp hat. His new style was emphatic - the gold teeth, broad-brimmed hats, flashy suits, fashionable outsized sunglasses and ostentatious jewelry made him one of the most colorful figures in the West Coast funk scene.

He modified his music accordingly. His albums Ain't That a Bitch (from which the successful singles "Superman Lover" and "I Need It" were taken) and Real Mother For Ya were landmark recordings of 1970s funk. "Telephone Bill", from the 1980 album Love Jones, featured Watson rapping.

The shooting death of his friend Larry Williams in 1980 and other personal setbacks led to Watson briefly withdrawing from the spotlight in the 1980s. "I got caught up with the wrong people doing the wrong things", he was quoted as saying by the New York Times.

The release of his album Bow Wow in 1994 brought Watson more visibility and chart success than he had ever known. The album received a Grammy Award nomination.

In a 1994 interview with David Ritz for liner notes to The Funk Anthology, Watson was asked if his 1980 song "Telephone Bill" anticipated rap music. "Anticipated?" Watson replied. "I damn well invented it!... And I wasn't the only one. Talking rhyming lyrics to a groove is something you'd hear in the clubs everywhere from Macon to Memphis. Man, talking has always been the name of the game. When I sing, I'm talking in melody. When I play, I'm talking with my guitar. I may be talking trash, baby, but I'm talking".

In 1995, he was given a Pioneer Award from the Rhythm & Blues Foundation in a presentation and performance ceremony at the Hollywood Palladium. In February 1995, Watson was interviewed by Tomcat Mahoney for his Brooklyn, New York-based blues radio show The Other Half. Watson discussed at length his influences and those he had influenced, referencing Guitar Slim, Jimi Hendrix, Frank Zappa and Stevie Ray Vaughan. He made a special guest appearance on Bo Diddley's 1996 album A Man Amongst Men, playing vocoder on the track "I Can't Stand It" and singing on the track "Bo Diddley Is Crazy".

"Johnny was always aware of what was going on around him", recalled Susan Maier Watson (later to become the musician's wife) in an interview printed in the liner notes to the album The Very Best of Johnny 'Guitar' Watson. "He was proud that he could change with the times and not get stuck in the past".

Watson died of a myocardial infarction on May 17, 1996, collapsing on stage while on tour in Yokohama, Japan.[8] His remains were brought home for interment at Forest Lawn Memorial Park Cemetery in Glendale, California.

Watson, a recognized master of the Fender Stratocaster guitar, has been compared to Jimi Hendrix and allegedly became irritated when asked about this comparison, supposedly stating: "I used to play the guitar standing on my hands. I had a 150-foot cord and I could get on top of the auditorium those things Jimi Hendrix was doing, I started that shit."[9]

Steve Miller not only did a cover of "Gangster of Love" on his 1968 album Sailor (substituting "Is your name "Stevie 'Guitar' Miller?" for the same line with Watson's name), he made a reference to it in his 1969 song "Space Cowboy" ("And you know that I'm a gangster of love") as well as in his 1973 hit song "The Joker" ("Some call me the gangster of love"). Miller had also borrowed the sobriquet for his own "The Gangster Is Back", on his 1971 album Rock Love.

Jimmie Vaughan, brother of Stevie Ray Vaughan, is quoted as saying: "When my brother Stevie and I were growing up in Dallas, we idolized very few guitarists. We were highly selective and highly critical. Johnny 'Guitar' Watson was at the top of the list, along with Freddie, Albert and B.B. King. He made magic."

Bobby Womack said: "Music-wise, he was the most dangerous gunslinger out there. Even when others made a lot of noise in the charts I'm thinking of Sly Stone or George Clinton you know they'd studied Johnny's stage style and listened very carefully to Johnny's grooves."

Etta James stated, in an interview at the 2006 Rochester Jazz Festival: "Johnny 'Guitar' Watson... Just one of my favorite singers of all time. I first met him when we were both on the road with Johnny Otis in the '50s, when I was a teenager. We traveled the country in a car together so I would hear him sing every night. His singing style was the one I took on when I was 17 people used to call me the female Johnny 'Guitar' Watson and him the male Etta James... He knew what the blues was all about..."

James is also quoted as saying: "I got everything from Johnny... He was my main model... My whole ballad style comes from my imitating Johnny's style... He was the baddest and the best... Johnny Guitar Watson was not just a guitarist: the man was a master musician. He could call out charts; he could write a beautiful melody or a nasty groove at the drop of a hat; he could lay on the harmonies and he could come up with a whole sound. They call Elvis the King; but the sure-enough King was Johnny 'Guitar' Watson."

This article uses material from the article Johnny "Guitar" Watson from the free encyclopedia Wikipedia and it is licensed under the GNU Free Documentation License.