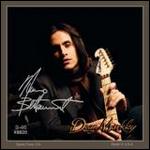 Nuno Duarte Gil Mendes Bettencourt (born September 20, 1966) is a Portuguese-American guitarist, singer-songwriter, and record producer. He is best known as the lead guitarist of the Boston rock band Extreme. He has also recorded a solo album as well as having founded bands including Mourning Widows, Population 1, DramaGods, The Satellite Party (headed by Jane's Addiction's then-former frontman and Lollapalooza co-founder Perry Farrell).[1] In 2007 he also reunited with Extreme to record new music and tour, with the band planning to release material sometime in 2017.[2]

Bettencourt was born on September 20, 1966 in Praia da Vitória, Terceira, Azores, Portugal, to Ezequiel Mendes Bettencourt and wife Aureolina da Cunha Gil de Ávila. When he was four years old, his family, including brothers Luís and Roberto, moved to Hudson, Massachusetts. Bettencourt lived on Main Street in Hudson for twenty-one years. Initially, Bettencourt had little interest in music, preferring to spend his time playing hockey and football. His first instrument was the drums and he played them exclusively until his brother, Luís, started teaching him the guitar.

While Bettencourt was slow to adopt the instrument under his brother's tutelage, his skills quickly developed when he began teaching himself, and he has mentioned in many interviews that he would skip many school days to practice upwards of seven hours a day. In his sophomore and junior years of high school, Bettencourt dropped out of sports so he could focus on playing guitar. He eventually dropped out of high school altogether, for the same reason.

As a guitarist, one of Bettencourt's earliest influences was Eddie Van Halen. However, as he developed his craft as a guitarist and a songwriter, his influences expanded to embrace The Beatles, Led Zeppelin, Prince, Queen (Brian May), Pat Travers, Paco de Lucía, Al Di Meola and Kayak.

Unable to make a dent in the music world with his Boston-based hair-metal act Sinful, Bettencourt rose to international prominence as a guitar player after he joined the Boston-area group Extreme in 1985. Signed to A&M Records shortly after Bettencourt joined the group, the band released its debut record, Extreme, in 1989. He then provided rhythm guitar on the single version of Janet Jackson's "Black Cat," which became a number one hit on the Billboard Hot 100.

In 1990, Extreme released their most critically acclaimed album, Pornograffitti, which included the hits "More Than Words" and "Hole Hearted". The album also has one of Bettencourt's most impressive guitar solos to date, The "Flight of the Wounded Bumblebee" – an interpretation of Nikolai Rimsky-Korsakov's "Flight of the Bumblebee" – as the intro guitar solo to the track "He-Man Woman Hater". Pornograffitti garnered admiration for Bettencourt from rock guitar enthusiasts. He was voted "Best New Talent" in a 1991 readers' poll by Guitar World magazine,[3] and that magazine later named him "Most Valuable Player" of 1991.[4]

The band followed up with III Sides to Every Story in 1992. Bettencourt composed and arranged the brass and string sections for this album and the full orchestra on the album.

In 1995, Extreme released the album Waiting for the Punchline, but the band broke up in 1996 when Bettencourt expressed his desire to follow a solo career. Shortly after, singer Gary Cherone went on to become the lead singer of Van Halen.

In 2007, the band reformed with the original line up (with the exception of Paul Geary) to begin work on a new album, Saudades de Rock, released on August 12, 2008, and subsequent tour.

In 1997, Bettencourt released his first solo effort, Schizophonic, which he had been working on for five years. The album was well-received critically, but was not a commercial success.

On December 16, 1997, Bettencourt's new band – Mourning Widows (whose name was inspired by writing he had seen on a church wall in Portugal), released their self-titled debut album in Japan on Polydor Records. It sold 45,000 in the first month. The band featured his brother Roberto Carlos's son Donovan Bettencourt on bass and New York drummer Jeff Consi. In 2000, Mourning Widow's follow-up, Furnished Souls for Rent originally released in Japan, and then in the U.S. Both Mourning Widows releases cultivated a strong following in Japan and New England.

In 2008, Bettencourt was featured on the soundtrack for the motion picture Smart People. Bettencourt is credited on the cover on the soundtrack as well. The soundtrack also features the Gary Cherone track, "Need I Say More", and Baby Animals selections. The album was released by Hollywood Records and is available on iTunes. The following year, Bettencourt was featured in a song and video called "Best Night Ever".[5] by Marshall Eriksen, a character on How I Met Your Mother. The video was a parody of Extreme's "More Than Words" video, in which the entire main cast of How I Met Your Mother made appearances.

Bettencourt formed the recording entity Population 1 and released the self-titled and self-produced 2002 release, Population 1, on Universal/Japan and YBM/Korea. In support of the Population 1 (which featured him playing all instruments on most tracks), release in Japan and Korea, Bettencourt assembled a band with Joe Pessia on bass, Steve Ferlazzo on keyboards and back-up vocals, and Kevin Figueiredo on drums and back-up vocals. Steve Ferlazzo was also featured in Cherone's next band carnation effort after Van Halen's breakup (Along with Pat Badger and Mike Mangini from Extreme) Tribe of Judah.

In 2004, Population 1 released Sessions from Room Four as well as an east coast tour in the fall of that year. Due to legal issues, the name Population 1 was dropped in 2005 and the band was renamed to Near Death Experience, then again, renamed to DramaGods. DramaGods released their first album in December 2005 available as an import via Victor Entertainment (Japan). The band then made their record available as a digital download on iTunes in early 2006.

DramaGods are currently seeking a record deal for release of their first album under the new name in the U.S. After an explosive debut on the increasingly popular The Late Late Show with Craig Ferguson, the band (still called 'Population 1' at that point) later appeared on the social networking website MySpace, featuring videos and songs from the aforementioned Dramagods album, entitled Love. Bettencourt decided to make the album available through iTunes before procuring an American record deal.

Bettencourt frequently toured with DramaGods in Japan where they appeared at the Udo Music Festival along with KISS, Santana, Jeff Beck, The Doobie Brothers, Alice in Chains, The Pretenders, Ben Folds Five, and others in July 2006 shortly after Bettencourt took part in a three date reunion tour with Extreme in New England.

Bettencourt's playing has been featured at 2004 on the Universal/Japan CD and DVD release of Guitar Wars featuring solo and collective performances of Bettencourt with many others, including Steve Hackett (Genesis, GTR), Led Zeppelin bassist John Paul Jones and Mr. Big/Racer X guitarist Paul Gilbert.

The Satellite Party is Jane's Addiction frontman Perry Farrell's new project which featured Bettencourt as lead guitarist (Nuno left the band in July 2007, citing disagreements about the direction of the live show), along with DramaGods drummer Kevin Figueiredo, bassist Carl Restivo (who also played with Extreme in the Azores in 2004), and Etty Farrell on backing vocals. An earlier lineup of the band with Perry Farrell, Etty Farrell, Nuno, Kevin Figueiredo, and Steve Ferlazo (Dramagods) on keyboards performed at the 2005 Lollapalooza festival.

Bettencourt helped produce Ultra Payloaded, the debut album by Satellite Party released on May 29, 2007 on Columbia Records. On June 29, 2007, they performed alongside Pearl Jam, Kings of Leon and Incubus in Nijmegen, The Netherlands. In late July 2007, Bettencourt and Drummer Kfigg departed Satellite Party.

The latest CD from magician Criss Angel contains a song on which Bettencourt appears and was released in June 2006. Sully Erna, Vince Neil, Shannon Larkin and Bettencourt join Angel in the video for the track "MF 2" which was shot atop the Aladdin parking garage.

In 1990, Bettencourt played rhythm guitar on the single version of Janet Jackson's "Black Cat," which was his first pop collaboration and a number one hit. In return for his contribution, Jackson was speculated to provide a spoken line on the song "Money (In God We Trust)" from Extreme's second album, Pornograffiti.[6][7]

In 1993, Bettencourt co-wrote and produced "Where Are You Going" for the Super Mario Bros. movie. He also joined Robert Palmer in the studio to record Palmer's album Honey.

Bettencourt has also collaborated with singer Suze DeMarchi and with all of her Baby Animals bandmates. On Baby Animals' second release, Shaved and Dangerous (July 1996), he produced a few songs and co-wrote "Because I Can". Additionally, all the members of Baby Animals appeared on Bettecourt's 1997 solo album Schizophonic. He also contributed greatly in writing, recording and producing DeMarchi's solo debut from 1998, Telelove.

In 1991, Bettencourt also produced Dweezil Zappa's release on Barking Pumpkin Records, Confessions. In this record, Bettencourt also sings lead vocals for the first time on a semi-ballad entitled "The Kiss", as well as playing guitar and singing background vocals on some other tracks. Extreme members Gary Cherone and Pat Badger also contributed.

In 1999, Bettencourt produced the album Magnolia, for the Portuguese singer and actress Lúcia Moniz. He also featured as singer and guitarist in the song "Try Again" of this album.

In 2006, Bettencourt along with his band DramaGods contributed their song "S'OK" to the album project Artists for Charity – Guitarists 4 the Kids, produced by Slang Productions to assist World Vision Canada in helping underprivileged kids in need.[8]

In November 2009, Bettencourt announced that he would be touring with Barbadian singer Rihanna on her Last Girl on Earth Tour as lead guitarist, having appeared alongside her in several TV shows and other performances. He has since performed as Rihanna's lead guitarist on every subsequent tour, including her Loud (2010), 777 (2012) and Diamonds World (2013) tours, respectively.

In July 2011, Steel Panther reported to Loud Magazine that Nuno would be "coming in to do something" on their then-upcoming release Balls Out.[9] The collaboration resulted in the track "It Won't Suck Itself", which also featured Nickelback frontman Chad Kroeger.[10]

In April and May 2016, Bettencourt was one of five guitarists featured on the Generation Axe tour.

The Nuno Bettencourt models are flagshipped by the American hand-made Washburn N4. The Washburn N4 guitar is a small reverse headstock super-strat which features the unique Stephen's Extended Cutaway neck joint for easy access to the higher frets. It also contains Bill Lawrence USA and Seymour Duncan pickups, and a Floyd Rose licensed tremolo. The production budget model of this guitar which is built in China is known as the N2 and features a standard bolt-on neck. The N3 was a short run Korean reproduction of the Washburn N4 using Washburn stock pickups. The original N2 and N3 guitars were prototype guitars built for Nuno. The N2 lacking the Stephen's Extended Cutaway and the N3 using a Bill Lawrence L500XL in the bridge and a Washburn pickup rather than the Seymour Duncan 59 in the neck. Other models include The N5 and N6. Bettencourt has also endorsed several Washburn acoustic models, as well as a line of 'set-neck' electric guitars including the P-Series which was released in various models with a more retro, deep cutaway style.

This article uses material from the article Nuno Bettencourt from the free encyclopedia Wikipedia and it is licensed under the GNU Free Documentation License.

Johannes Brahms Andante aus dem Klavierquartett Nr. 3 c-moll op. 60
Update Required To play the media you will need to either update your browser to a recent version or update your Flash plugin.