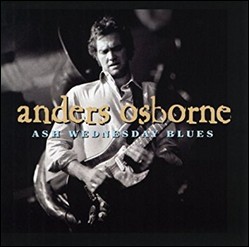 born in 1966 in Uddevalla, Västergötland, Sweden

As a teen, Anders started playing guitar and listening to Bob Dylan, Neil Young, Jackson Browne, and Joni Mitchell records. He fell in love with the vocal styles of Ray Charles, Van Morrison and Lowell George. Then he heard the blues of Robert Johnson and recordings of African drumming, and suddenly, everything clicked. "Blues connected everything together for me," Osborne recalls. "The early rock, the R&B, the jazz, the singer-songwriters. Blues was like a thread running through everything." He began playing in Open D tuning (a rare choice for a guitar virtuoso), which gives his fretwork a signature sound and feel. "I first heard Open D on Joni Mitchell's Blue," he says, "and my fingers just fit the tuning."[1]

Anders left home at age sixteen, and hitchhiked and played music throughout Europe, North Africa, the Middle East, Asia, and the United States. He settled in New Orleans in 1985 and still calls Louisiana his home.

During his first decade in New Orleans, Anders lived in the French Quarter and Mid-City. He played regularly in local clubs, and after gaining a following, Anders received an independent record deal with Rabadash Records out of New Orleans, and released Doin' Fine in 1989.

Anders and his band toured the U.S. during these years and in 1995, he was signed to Okeh Records. He released Which Way to Here, an album that dealt with spirituality and tolerance. The record became Osborne's first commercial break with two top-five singles "Favorite Son" and "Pleasin' You." Both were featured in several Hollywood movies, and the latter was later recorded by Jonny Lang.

Shanachie Entertainment signed Osborne in 1998 and, in 1999, released his fourth album, Living Room, a personal record that signified some new directions in Osborne's music after the breakup with his longtime accompanist Theresa Andersson,[2] drug use, and a family death. This album also features guest appearances by Keb' Mo', Kirk Joseph and Tommy Malone.

Besides writing for his own album, Osborne has had a number of his songs successfully recorded by other artists. Keb' Mo's 1999 Grammy Award winning album Slow Down, featured two songs co-written with Osborne.[3]

After his Shanachie recordings, Osborne worked as a professional songwriter in New Orleans and then in Nashville, first for PolyGram and then its successor Universal Music. His song, "Watch the Wind Blow By," was recorded by the country musician Tim McGraw, hitting No. 1 on the country charts for two weeks and selling over three million albums.[3]

More recently, he has co-written with Tab Benoit, Mike Zito and Johnny Sansone, for whom he's also served as producer.

Returning to New Orleans from Nashville, he recorded Coming Down (2007), a stripped-down semi-acoustic album which was released on the M.C. label and was nominated for the 8th Annual Independent Music Awards Folk/Singer-Songwriter Album of the Year.

In 2009, Osborne recorded a new, full band album co-produced by Osborne, Galactic’s Stanton Moore and Pepper Keenan. All songs on the album were written or co-written by Osborne. The album was picked up by Chicago-based Alligator Records, who signed Osborne and released the new recording in 2010 under the title American Patchwork. New Orleans’ OffBeat magazine praised the album, saying, “American Patchwork is the album Osborne fans have been waiting for. The record is a focused and tuneful triumph. Osborne’s gifts as a guitar player are significant. His voice is so emotionally intense it feels like an explosion. He writes with remarkable eloquence...this is the living definition of great art.” [4] Relix described the album as “raging, expressive guitar and soulful singing...from scorched-earth rock to sweet, tender ballads.”[5]

Since the release of American Patchwork, Osborne has toured virtually non-stop, performing with his own band, solo with Keb Mo, with The Stanton Moore Trio, with Toots and the Maytals, alongside Karl Denson’s Tiny Universe and with Luther Dickinson as well as with The Voice Of The Wetlands All-Stars. He appeared on Galactic’s song "Dark Water" from their Ya Ka Ma album, and in 2011 produced and played on critically acclaimed albums by Tab Benoit, Johnny Sansone and Mike Zito. In 2012, he played on and acted as associate producer of Billy Iuso’s Naked album.

Along the way, he also found time to write and record the next chapter in his still-unfolding career, Black Eye Galaxy, released in 2012. Recorded at the famed Dockside Studio in Maurice, Louisiana, Black Eye Galaxy was produced by Osborne along with engineer Warren Riker and Galactic's Stanton Moore. Sounds on the album range from heavy electric mayhem to acoustic melodicism. Blurt Magazine said, “Black Eye Galaxy is a work of art -- a throwback to the days before corporations completely controlled and corrupted media and culture. It is the struggle of a man to survive addiction and find some peace and redemption. Great art is not afraid to say something and take big risks. And on each work he does, Osborne grows as an artist. We are lucky to get a chance to witness this. The blues is about hard truth and healing. And to the extent he covers both; you could say he is a blues guy. Kudos must go to Alligator Records -- a great if not our greatest-blues label -- for letting Anders Osborne follow his vision, inspire us with his story and dazzle us with his craft. Black Eye Galaxy is a great album.” [6]

In late 2012, he was back in the studio recording a six-song EP entitled Three Free Amigos, which was released by Alligator early in 2013. The EP, produced by Osborne and Warren Riker, focused more on Osborne’s melodic, acoustic side. Players included Osborne’s touring band of bassist Carl Dufresne and drummer Eric Bolivar, plus guitarist Billy Iuso and multi-instrumentalist Johnny Sansone, Osborne himself played guitar, bass, keyboards and drums on various tracks. It was described by Relix as “rugged, soulful singing superb hard-hitting songs…A phenomenal blend of self-awareness, spirit and muscle.” [7]

Osborne continues to tour almost constantly, both with his own band and in combination with other artists. He’s appeared multiple times at the New Orleans Jazz & Heritage Festival as well as at Bonnaroo Music Festival, The High Sierra Festival, The Telluride Blues & Brews Festival, The Hollowbaloo Music & Arts Festival in Honolulu, the Hangout Festival, WYEP Summer Music Fest, Central Park SummerStage, Miami Valley Music fest, as well as playing with Phil Lesh and others at Terrapin Crossroads.

In 2015, Osborne was included in the all-star cast headed by Derek Trucks and Susan Tedeschi of Tedeschi Trucks Band in a memorial concert to honor Joe Cocker Mad Dogs & Englishmen at the Lockn' Festival. [8]

His album, Peace, was released on October 8, 2013. Osborne was quoted as saying, “Peace is light from darkness. The songs are written from the outside looking in. They are not making any judgments. I’m just stating facts. I’m writing from a brighter perspective. There’s less dusk and dark, and much more sunlight. The results are greater than I expected. The driving tones and sounds are free and natural. This is one of the coolest records I’ve ever made.”

Osborne announced details of his album Spacedust and Oceans Views in February 2016, releasing it the following month.[9] He followed this in July 2016 with Flower Box.

This article uses material from the article Anders Osborne from the free encyclopedia Wikipedia and it is licensed under the GNU Free Documentation License.