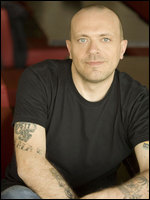 Massimo "Max" Pezzali (born 14 November 1967 in Pavia) was the principal singer and song writer of the pop rock group "883". In 2004, he released his first solo album "Il mondo insieme a te". The album was successful in Italy and since then Pezzali has remained a solo artist. Taking into account his solo work, as well as his work dating back to the 883 period, Max Pezzali has sold over 18 million albums, thereby becoming one of the most popular singers in the history of Italian music.

Max Pezzali was born on November 14, 1967 in Pavia, Italy. His parents owned a florist shop near the family home. During his high school years, Pezzali was held back for one year because he did not achieve the required passing grades. It was in this class that he met his friend and future band mate, Mauro Repetto. Pezzali and Repetto both shared a love for rock and roll music and it was this commonality that led them to the idea of starting a band. Together they went on holiday to the United States. During their stay they purchased a cheap synthesizer, a drumkit and some CDs, and upon their return to Pavia, immediately began writing music.

Being a big fan of motorbikes, especially Harley Davidsons, they decided to name the group 883 after the mark's Sportster. Pezzali and Repetto started their singing career at the Castrocaro Music Festival in 1991, with the song "Non me la menare", following with the # 1 hit LP "Hanno ucciso l'uomo ragno" ("They killed Spider-Man"), in 1992. In 1993 he and Rosario Fiorello won the "Festival italiano" with the song "Come Mai"[1]. In 1994 Repetto left the band on good terms to pursue his dream of becoming a movie director in America. The departure of Mauro Repetto did not stop the group's productivity: The band continued to perform and in 1995 released the new album La donna il sogno & il grande incubo which sold over 1.200.000 million copies. In 1997, 883 produced "La dura legge del gol", The collection "Gli Anni" in 1998, "Grazie Mille" in 1999, "Mille Grazie" in 2000 (released exclusively in Austria, Switzerland and Germany) and "Uno in più" in 2001. The band continued without him in 2002 when Pezzali announced his plans to begin a solo career and to take full credit for his songs. Over the course their musical career (1992–2002), 883 published six studio albums, released over 25 music videos and frequently toured throughout Italy.

In 2003, Pezzali began work on his first solo album, which was released in 2004. His style of writing differed very little from his music with "883". The main themes of his songs were still friendship, honesty, and relationships. In 2005, an "883" and "Max Pezzali" greatest hits album was released, which included a DVD with all of the music videos made to date; it stayed at the top of the album chart for 10 weeks. His second solo album, "Time Out", was released during the summer of 2007. It proved to be a great success with its most popular songs remaining at the top of the charts throughout the summer. Pezzali is beloved by his fans for his friendly approach, charismatic stage performance, and his commitment to his music. In 2008 he came out with a new album "Max Live 2008" which contained the greatest hits of his live performances and two unpublished songs: (Mezzo pieno o mezzo vuoto and Ritornerò). In the summer of 2008, the Max Live Tour 2008 began in June and performed in more than 25 Italian cities. The first concert took place in Monza; Max followed with more 24 concerts and ending with his last stage performance on December 31 at "Castelsardo". Following this tour he decided to take a break, when he decided to place his musical life in the background in order to dedicate himself to his newborn son. During these three years of semi-time off, he found time to collaborate with other singers and even participated in some reality shows (for example, participating as a guest star on, X-Factor Italy in 2009). In 2010 he decided to take a year long sabbatical to write his next album that was released the following year. 2017 saw the release of his new single "Le canzoni alla Radio" featuring Nile Rodgers [2].

Max is currently living in Rome where he used to live with Martina, his ex-wife. Max and Martina were married on 2 April 2005. After 13 years together, they became officially separated in 2014. They have a son, Hilo, born in 2008. A few months after his separation, he became engaged to Debora Pelamatti. [3].

This article uses material from the article Max Pezzali from the free encyclopedia Wikipedia and it is licensed under the GNU Free Documentation License.

Franz Schubert Ständchen
Update Required To play the media you will need to either update your browser to a recent version or update your Flash plugin.