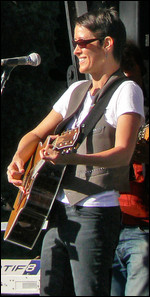 Shocked was born Karen Michelle Johnston on February 24, 1962, in Dallas, Texas, at the Baylor University Medical Center.[1][2] Her stepfather was in the US Army and the family moved from base to base. Her mother was Mormon and she was raised in that faith.[3] Her mother had her committed to a psychiatric hospital for a time during her teenage years.[1] She went through a punk rock phase, wearing a Mohawk hairdo and squatting in abandoned buildings in San Francisco.[3]

In 1984, Shocked adopted the stage name "Michelle Shocked", a play on the expression "Shell Shocked", as she explained in an interview with Green Left Weekly: "The term 'Miss Shell Shocked' is a direct reference to the thousand-yard stare, which was a term that they first used to describe the victims of shell-shock in World War One. These people from outward appearances had survived the war quite well when in fact inside their minds were blown. I first used that name in 1984 at the Democratic Convention in San Francisco where I was arrested for protesting and demonstrating against corporations who contribute money to both the Democratic Party and the Republican Party campaigns."[4]

Shocked received her first international exposure after Pete Lawrence recorded her performance on a portable tape recorder at the Kerrville Folk Festival in Texas. Lawrence released the tape in Europe as The Texas Campfire Tapes (1986). The album's success brought major labels asking her to sign a contract. Shocked was resistant to what she saw as the machinations of the music industry, and worked to retain a degree of creative control.[3]

Her first US success came with the release of her 1988 debut album Short Sharp Shocked on college radio rotations around the country, which was met with strong acclaim from listeners. The debut single Anchorage broke into the Billboard Hot 100,[5] but a follow-up single from the album, When I Grow Up did not chart.[6] Short Sharp Shocked was the first album in what Shocked later described as a "trilogy" for Mercury Records.[7]

The second album in the trilogy, Captain Swing, was released in 1989. Described by reviewer Chris Woodstra as an album of "swing and big-band music" that "no one expected",[8] the album was promoted with the release of On the Greener Side, a gender-reversed parody of Robert Palmer's Addicted to Love, in which topless male models performed the motions made famous by the female models in Palmer's video.[9]

The trilogy concluded with her 1992 album Arkansas Traveler. Her desire to have the cover portray her in blackface in tribute to the roots of the music featured on the album drew criticism and a change in the cover art.[10] However, the album received little commercial notice, and Shocked parted ways with the label following an acrimonious lawsuit.[11]

In 1995, Shocked contributed an original song to the soundtrack for the film Dead Man Walking called "Quality of Mercy". In 1996, she released a studio version of an underground release Kind-Hearted Woman (black cover) on the short-lived Private Music label.

Starting in 2002 with the release of Deep Natural, Shocked established her own label, Mighty Sound. She reissued expanded versions of her entire catalog, made possible by having retained complete ownership of her work when she signed with Mercury in 1987.

An acoustic version of her song "How You Play the Game" was featured as the opening and credits soundtrack in the DVD of the 2004 documentary film Bush's Brain.

In 1992, Shocked married journalist Bart Bull. They divorced in 2004.[13] She reported in 2007 that she was in a relationship with Disney artist David Willardson,[14] who she had first worked with in 2001 when he designed the branding for her record label Mighty Sound. Willardson has since designed album covers for Deep Natural and for Shocked's album reissues.[15] Willardson and Shocked share an artist's studio in the Biscuit Company Lofts.[16]

Shocked put forward an ambiguous sexuality from the beginning of her career. Her music appealed to many people including lesbians. According to Gay 100 author Paul Russell, in 1989, she joked to a US broadcast television audience that the Grammy award for Best Contemporary Folk Recording, whose nominees included herself, eventual winner Tracy Chapman, Phranc, and Indigo Girls, should have been called "Best Lesbian Vocalist".[17] Shocked herself remembers that she joked the award "could have been called 'They Might Be Lesbians'".[2] After an Earth Day performance in Chicago in April 1990, she gave an interview to Christie L. Nordhielm of Outlines, a Chicago newspaper for the gay community. Accompanied by future husband, journalist Bart Bull, she told Nordhielm she felt boxed in by listener expectations that she was either straight or gay; she said, "I would like a much broader definition for myself."[3] She explained her wish to be politically and sexually subversive by saying, "I resent like hell that I was maybe 18 years old before I even heard the 'L' word. I mean, that's understood, growing up sheltered in a Mormon environment. But it would have made all the difference for me had I grown up knowing that the reason I didn't fit in, was because they hadn't told me there were more categories to fit into."[3] She said she did not condone the outing activities engaged in by members of ACT UP.[3] Since then, Shocked has been listed as bisexual in reference books,[18][19] and does not self-identify as a lesbian. In a 2013 interview with Piers Morgan, Shocked stated, "I am, for the last 10 years, so deeply in love with a man that the idea of living my life without him is impossible. I know how much I love him, and knowing that passion that I have for him, would I ever want to deny that to anyone else? Absolutely not."[20]

Religion and views on homosexuality

In the mid-1990s, Shocked joined the choir of the West Angeles Church of God in Christ. After attending for several years, she became a born-again Christian.[2] Since her religious conversion, Shocked has made statements against homosexuality, linking this stance to her religious beliefs. In a 2008 interview with the Dallas Voice, a gay newspaper, she said that she would be "honored" to be called an "honorary lesbian" but added:

There are some inconvenient truths that I'm now a born again, sanctified, saved-in-the-blood Christian. So much of what's said and done in the name of that Christianity is appalling. According to my Bible, which I didn't write, homosexuality is immoral. But homosexuality is no more or less a sin than fornication. And I'm a fornicator with a capital F.[21]

While performing at the Wild Goose Festival in June 2011, a Christian event at which the inclusion of gay Christians was debated, Shocked responded to an audience member's question about homosexuality by saying, "Who drafted me as a gay icon? You are looking at the world's greatest homophobe. Ask God what He thinks."[22]

On March 17, 2013, Shocked made an impromptu speech against same-sex marriage during a concert at Yoshi's nightclub in San Francisco, which led some audience members to leave in protest, and club management to end the show.[23][24] All venues eventually cancelled scheduled performances of her "Roadworks Tour" in response to reports of Shocked's remarks.[25] In a March 20, 2013, email to the news media, Shocked apologized, saying that her comments had been misinterpreted, and that she was not describing her own opinions about homosexuality, but rather those of some Christians.[26] An audio recording of the performance was reported as contradicting Shocked's post-performance explanation.[27][28][29]

On April 1, 2013, Michelle Shocked appeared on CNN's Piers Morgan Live to clarify her remarks. Morgan asked Shocked three times whether she was in fact "homophobic". Eventually, Shocked stated, "If you want to keep this simple for the audience, let me just give you a straight no, I'm not homophobic. But the truth, I don't think, lies in the simplicity. It's in the nuance, and that's been completely lost in this" She said that the meaning behind her prior comments was misinterpreted.[30]

Although it has been reported that Shocked won the 1989 Grammy Award for Best Contemporary Folk Recording,[33] the award actually went to Tracy Chapman.[34] Shocked was honored as having the Folk Album of the Year at the CMJ New Music Awards ceremony in late October 1989, taped in New York City for later broadcast. The award recognized the popularity of Short Sharp Shocked with college radio listeners.[17]

This article uses material from the article Michelle Shocked from the free encyclopedia Wikipedia and it is licensed under the GNU Free Documentation License.