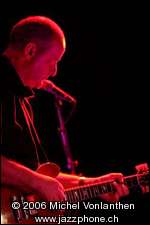 John Victor Edwards - usually known by his nickname, Rhino (born 9 May 1953, Chiswick, London), is an English bass guitarist, playing in the rock group Status Quo. He was educated at Chiswick Grammar School.

As a child he learnt classical violin and won a scholarship to the London College of Music at the age of eleven.

Around 1973-4 John was to be found playing simultaneously in two pub bands in The White Bear in Hounslow (a venue renowned at that time as a music venue, where Rick Wakeman had been a regular player). The two bands were The Sunday Band (playing on that day of the week), playing covers of rock standards, and Rococo, with a regular Friday slot, and sharing the same singer as well as bass player. Rococo released a single "Ultrastar / Wildfire" on Decca Deram in 1973.

Edwards' bass playing first appeared on a hit record in the UK in 1977, when "Magic Fly" by the French group, Space reached the Top Ten of the UK singles chart. Later on he joined Judie Tzuke's backing band whereupon he was given the nickname 'Rhino' for being so clumsy.

Edwards was working with drummer Jeff Rich, when Status Quo guitarist Rick Parfitt approached them both to work on his solo album Recorded Delivery. When Status Quo reformed with a new lineup in 1986, Edwards and Rich were called in to replace founding member Alan Lancaster and drummer Pete Kircher.

He released the album Rhino's Revenge in 2000, on which some tracks featured other members of Status Quo. Recently he has played a small number of gigs in the UK and Europe with Woodedz, playing alongside his children.

As a fan of Brentford F.C., Edwards wrote a song in early 2006 about striker Lloyd Owusu's return to the club for the start of that football season.[1]

Edwards owns several different basses from different manufacturers, including Rickenbacker and Wal. However while playing live with Status Quo he uses Status basses, mainly two headless four stringed and a five stringed model. His signal is run through a Roland B5 multi-effect system into two Marshall Dynamic Bass System heads with a 2x15 cabinet and a 4x10 cabinets. During the song 'Gerdundula' Edwards plays a Tanglewood guitar through a Marshall JCM800 head and a 4x12 cabinet.[2]

This article uses material from the article John Edwards (musician) from the free encyclopedia Wikipedia and it is licensed under the GNU Free Documentation License.