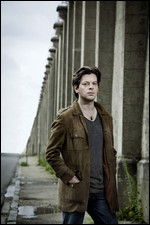 Benjamin Biolay (French pronunciation: [b.a.m bjo.l]; born 20 January 1973) is a French singer, songwriter, musician, actor and record producer. He is the brother of singer Coralie Clément, whose two albums he wrote and produced, and the ex-husband of Chiara Mastroianni, the daughter of Catherine Deneuve and Marcello Mastroianni.

His low-key vocal style is somewhat similar to French pop star Étienne Daho. With the singer Keren Ann, whose first two albums he co-wrote and produced, he contributed several songs to Chambre avec Vue, the successful comeback album of singer Henri Salvador, and has since worked as a writer, arranger or producer for other icons of French music, including Juliette Gréco, Julien Clerc, Françoise Hardy and Vanessa Paradis.

He wrote or performed most of the songs on the 2004 soundtrack to Clara et Moi by Arnaud Viard, and released the album Home with his wife the same year. After two more rock oriented albums in 2005 and 2007 he was dropped by his record company and began working on his first independent release, La Superbe, released on Naïve records in 2009. This was followed by the soundtrack album Pourquoi tu pleures in 2011 and Vengeance in 2012.

This article uses material from the article Benjamin Biolay from the free encyclopedia Wikipedia and it is licensed under the GNU Free Documentation License.