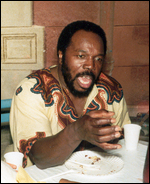 Thaddeus Joseph Jones (March 28, 1923 – August 20, 1986) was an American jazz trumpeter, composer, and bandleader who has been called "one of the all-time greatest jazz trumpet soloists."[1]

Thad Jones was born in Pontiac, Michigan, on March 28, 1923, to Henry and Olivvia Jones, a musical family of 10 (an older brother was pianist Hank Jones and a younger brother was drummer Elvin Jones). A self-taught musician, Thad began performing professionally at the age of 16. He served in U.S. Army bands during World War II (1943–46).

After his military service, which included an association with the U.S. Military School of Music and working with area bands in Des Moines and Oklahoma City, Jones became a member of the Count Basie Orchestra in May 1954. He was featured as a soloist on such well-known tunes as "April in Paris", "Shiny Stockings" and "Corner Pocket". However, his main contribution to Basie's organization was nearly two dozen arrangements and compositions, which included "The Deacon", "H.R.H." (Her Royal Highness — in honor of the band's command performance in London), "Counter Block", and lesser known tracks such as "Speaking of Sounds". His hymn-like ballad "To You" was performed by the Basie band combined with the Duke Ellington Orchestra in their only recording together, and the recording Dance Along With Basie contains nearly an entire album of Jones' uncredited arrangements of standard tunes.

In 1959 Jones played cornet on Thelonious Monk's 5 by Monk by 5 album.

Jones left the Basie Orchestra in 1963 to become a freelance arranger and musician in New York City. In 1965 he and drummer Mel Lewis formed the Thad Jones/Mel Lewis Orchestra. The group started with informal late-night jam sessions among New York's top studio musicians. They began performing at the Village Vanguard in February 1966, to wide acclaim, and continued with Jones in the lead for 12 years. They won a 1978 Grammy Award for their album Live in Munich.[2] Jones also taught at William Paterson College in New Jersey, which is now the site of the Thad Jones Archive, containing pencil scores and vintage photos as part of the Living Jazz Archives.

Jones' big-band arranging style was unique, especially from the standpoint of featuring dissonant voicings in a tonal context. This required the members of his big band to play correctly in tune, otherwise the dense chords he wrote would not sound correct. Minor 2nds and major 7ths are often featured in his voicings, especially when the entire band plays a long, powerful chord that some would describe as having "bite".

In January 1979,[3] Thad suddenly moved to Copenhagen, Denmark (to the great surprise of his New York bandmates), where several other U.S. jazz musicians had gone to live. There he became the leader of The Danish Radio Big Band, and married a Danish woman (Lis). Jones transformed the Danish Radio Big Band into one of the world's best. The result can be heard on a live-recording from the Montmartre in Copenhagen. In July 1979 Jones formed a new big band, Eclipse, with which he recorded a live album, Eclipse.[4] Several Americans were on the album: pianist Horace Parlan, baritonist Sahib Shihab, trumpeter Tim Hagans and trombonist/vocalist Richard B. Boone, along with trombonists Bjarne Thanning and Ture Larsen, trumpeter Lars Togeby, altoists Ole Thøger and Michael Hove, tenor saxophonist Bent Jædig, and Jesper Lundgaard on bass. Jones further composed for the Danish Radio Big Band and taught jazz at the Royal Danish Conservatory in Copenhagen. He studied composition formally during this period, and also took up the valve trombone.

In February 1985, Jones returned to the U.S. to take over the leadership of the Count Basie Orchestra, upon his former leader's death. Thad fronted the Basie band on numerous tours, also writing arrangements for recordings and performances with vocalist Caterina Valente and the Manhattan Transfer, but had to step down due to ill health. He returned to his home in Copenhagen for the last few months of his life, and died of cancer on August 20, 1986, at Herlev Hospital.[5] In later years his playing ability was diminished due to lip injury, but his composing and arranging skills blossomed.[5] His best-known composition is the standard "A Child Is Born".

At the time of his death, Jones had a six-year-old son, also named Thad (Thaddeus Joseph William Jones), with his wife Lis Jones. He had a daughter Thedia and a son Bruce in the U.S. He was buried in Copenhagen's Vestre Kirkegård Cemetery (Western Churchyard Cemetery).[6]

This article uses material from the article Thad Jones from the free encyclopedia Wikipedia and it is licensed under the GNU Free Documentation License.