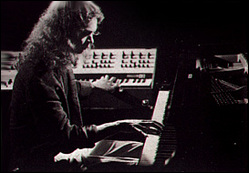 Lyle David Mays (born November 27, 1953) is an American jazz pianist and composer best known as a member of the Pat Metheny Group.[1][2] Metheny and Mays composed and arranged nearly all of the group's music, for which Mays has won eleven Grammy Awards.[3]

While growing up, Mays had four main interests: chess, mathematics, architecture, and music. His parents were musically inclined – his mother was a pianist, his father was a guitarist – and he was able to study the piano with the help of instructor Rose Barron. She allowed Mays the opportunity to practice improvisation after the structured elements of the lesson were completed. At age 9 he played organ at a family member's wedding, and at age 14 he began to play organ in church.[4] In summer camp he was introduced to important jazz artists.[3]

Bill Evans' album Live in Montreux and Miles Davis' album Filles de Kilimanjaro were important influences on his formation as a jazz musician. He graduated from the University of North Texas after attending the University of Wisconsin-Eau Claire.[5][6][7] He composed and arranged for the One O'Clock Lab Band and was the composer and arranger of Grammy-nominated album Lab 75.[8]

In an interview with JAZZIZ magazine in 2016, Mays revealed his current career as a software manager.[10]

In the Pat Metheny Group, Mays provides arrangements, orchestration, and the harmonic and metric backbone of the group's musical signature. He occasionally performs on electric guitar as well. He played trumpet on the songs "Forward March" and "Yolanda You Learn" from the album First Circle (1984) and during the tour for that album.[3]

His albums as a leader reflect a variety of interests. Lyle Mays and Street Dreams build on the content of the Pat Metheny Group, while Fictionary is a straight-ahead jazz trio session featuring fellow North Texan Marc Johnson on bass and Jack DeJohnette on drums.

He has also composed and recorded music for children's records, such as Tale of Peter Rabbit, with text read by Meryl Streep.[3]

The Steppenwolf Theater Company of Chicago featured an assortment of compositions by Lyle Mays and Pat Metheny for their production of Lyle Kessler's play Orphans.[11]

He has composed classical music such as "Twelve Days in the Shadow of a Miracle", a piece for harp, flute, viola, and synthesizer (recorded in 1996 by the Debussy Trio).[12]

This article uses material from the article Lyle Mays from the free encyclopedia Wikipedia and it is licensed under the GNU Free Documentation License.